Kids Encyclopedia Facts
Not to be confused with Starvation Creek State Park. 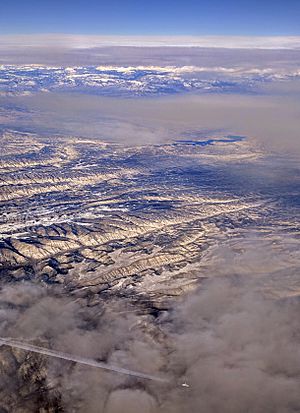 Aerial view of the region south of the park, with Starvation Reservoir visible near the top. Oil and oil shale drilling platforms dot the landscape.

The 3,500-acre (14 km2) Starvation Reservoir is open year-round, and is popular for fishing and boating. It lies at an elevation of 5,712 feet (1,741 m). Established in 1972, the marina features a 54-unit RV campground along with developed and primitive camping, rental cabins, boat ramp and dock, a sand beach, restrooms, showers, a group-use pavilion, sewage disposal, and fish cleaning stations. Primitive camping is allowed in designated areas around the perimeter of the reservoir for a fee. OHVs are only allowed at Knight Hollow Campground. County owned dirt roads are open (including the road from Knight Hollow to the town of Duchesne) in the nearby area.

There are various narratives explaining the name "Starvation". The most credible story was recounted by Orson Mott. In 1900, A.M. Murdock of Heber city, approached Major Myton of the Uintah Indian reservation to purchase grazing permits for his cattle. He was given grazing permits in the upper Strawberry river area. Dave Murdock, brother of Al Murdock, had secured a contract to provide beef to the Ute tribe at Fort Duchesne. In the fall of 1904 they brought the herd out of the high grazing areas and made it to the river bottoms which is now covered by Starvation reservoir. Very heavy snows stranded the herd. With no feed the entire herd died. Dave Murdock named the area "Starvation Flats" from this experience.

Another account describes a group of fur trappers stranded in harsh winter conditions who survived by stealing a local Native American cache of food, which resulted in their starvation. Another account tells the opposite story, with the Indians doing the stealing and the trappers starving. A third story involves a local rancher who attempted to graze livestock in the area, and they all starved. Yet another explanation for the name involves settlers in the early 1900s trying to survive along the banks of the Strawberry River, in the area now occupied by the reservoir. These settlers dealt with near-starvation in a hostile environment. Winters in the area are long and cold, and their livestock often died. The area's short growing season was hindered by floods, hail, early frost and other problems. These settlers could have nicknamed the area Starvation.

All content from Kiddle encyclopedia articles (including the article images and facts) can be freely used under Attribution-ShareAlike license, unless stated otherwise. Cite this article:
Starvation State Park Facts for Kids. Kiddle Encyclopedia.