Founded in 1881 by fourteen of New York City’s first “environmental activists”, the Staten Island Museum houses artifacts and specimens from ancient to contemporary periods. This “mini-Smithsonian” is rich with arts, natural sciences and local history.

The museum’s holdings are formally organized into three main collections: Natural Sciences, Fine Art, and History Archives & Library. The natural science collections encompass over 500,000 botanical, biological, anthropological and mineral specimens including bird nests and eggs, mounted animals, fossils, shells, and a significant collection of insects, including important type specimens. Based upon a 19th-century model, the art collection includes works spanning prehistory to the modern period, with representations of diverse world cultures from both the Western and Non-Western traditions. The historical collections include a library, maps and atlases, early films, audio recordings, photographs, historical objects, ephemera and archival documents reaching back to the 17th century.

The Staten Island Museum was founded in 1881 as a private society of local naturalists and antiquarians who pooled their personal collections to create the public museum in 1908. William T. Davis, along with Nathaniel Lord Britton, Arthur Hollick, Charles W. Leng, are some of the founding fathers who also contributed significantly to the city’s nature preserve, research and education. The museum focused on environmental protection and has participated in the preservation of High Rock Park and the William T. Davis Wildlife Refuge. Since 1908, the staff has conducted annual bird counts together with the Audubon Society. In 1909, the Section of Art was organized, and in 1919 the Staten Island Institute of Arts & Sciences was incorporated to reflect the broader mission which also includes local history.

The museum has been called a "Mini Smithsonian" because of the breadth of its collections, and is based on a 19th-century model of creating within one's own community the complete resources for a cultural education. As a general interest museum, it is one of the last intact examples of the first type of public museum in America, and today serves a diverse audience of 80,000 people annually, with the goal of providing cross-disciplinary exhibitions for a wide cross-section of visitors.

It is the mission of the Staten Island Museum to document, research, preserve, collect, interpret and exhibit significant objects and themes in the areas of natural science, art and local history, with the goal of educating, celebrating and enriching the community of Staten Island in particular, and the New York metropolitan region in general.

The museum has over half a million items in the local History Collection, including authentic land grants with the wax seals of King Charles II (1674) and King William III (1696) as well as a 1776 military document signed by William Howe, Commander in Chief of the British Armies.

The Museum houses a 130-year comprehensive record of the changing biodiversity of the New York metro area, fully documented with specimens, including specimens of birds and mammals, a collection of fish, amphibians and reptiles preserved in alcohol, 500,000 mounted insects, and 25,000 plants preserved in the herbarium. 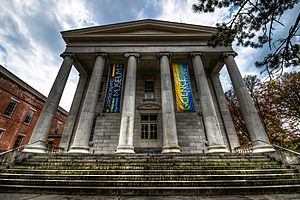 Staten Island’s "hometown" museum has consolidated its collection to the Staten Island Museum at Snug Harbor. A state of the art LEED certified building opened to the public as of September 2015. In addition, the Museum operates its Art Conservation Studio and the Staten Island History Center & Archives at Snug Harbor Cultural Center, joining other cultural institutions at the site. The museum has transformed from the 19th-century model of a museum as a "cabinet of curiosities", into a fully realized 21st-century institution that is accessible, diverse, technologically advanced, and demonstrates leadership in collections management, exhibitions, education and public programming.

The new museum, on the Snug Harbor Campus, is the first federal historic landmark on Staten Island designed to achieve LEED Gold certification, including geo-thermal heating and cooling. The mainly city-funded ($23 million) renovation of Building A added over 25,000 square feet (2,300 m2), with additional space to follow in Building B (Bio-Diversity) in 2022.

In addition, a life-size replica of a mastodon greets visitors as they explore the museum, a creature that once roamed the hills of Staten Island as evidenced by local discoveries held in the museum's fossil collection on display in the new lobby.

All content from Kiddle encyclopedia articles (including the article images and facts) can be freely used under Attribution-ShareAlike license, unless stated otherwise. Cite this article:
Staten Island Museum Facts for Kids. Kiddle Encyclopedia.