Steam Incorporated, often abbreviated to Steam Inc., is a railway heritage and preservation society based at the Paekakariki railway station, Paekakariki at the southern end of the Kapiti Coast, approximately 50 minutes north of Wellington on the west coast of New Zealand's North Island. Unlike some societies who operate on preserved sections of closed branch lines (e.g. the Kingston Flyer on the Kingston Branch or the Pleasant Point Museum and Railway on the Fairlie Branch), Steam Incorporated own a depot ("The Engine Shed") beside one of the country's most important railway lines, the North Island Main Trunk Railway, and restores heritage locomotives and rolling stock for use on excursions on the regular national rail network.

History of the depot

Paekakariki's close association with the railway began in 1886 when the Wellington and Manawatu Railway Company's line from Wellington to Longburn opened. Paekakariki Railway Station was a large station despite the settlement's small size, as it was ideally located as a locomotive changeover point - powerful engines were required to tackle the difficult grades between Wellington and Paekakariki, while lighter and more nimble ones were better suited to the gentle grades and straight track through the Kapiti Coast and Horowhenua to Manawatu. The New Zealand Railways Department (NZR) took over the Wellington and Manawatu Railway in December 1908, but Paekakariki's status as an important depot remained unchanged. In 1940, the line from Wellington to Paekakariki was electrified and Paekakariki's depot was altered: it became the changeover point from electric to steam motive power, or electric to diesel from the 1950s onwards. Paekakariki also was an important goods transfer point between the Railways and its "Rail Air" service that operated out of Paraparaumu across Cook Strait, before the Rail ferries. A large goods shed was constructed at Paekakariki by U.S. Marines stationed in the area for use with the Rail Air service during World War II. In the late 1960s with steam power coming to an end, the locomotive depot in Paekakariki was closed and the diesel locomotives which replaced steam were based out of Wellington instead. The main engine shed was demolished along with a number of other buildings, but the Rail Air Shed, two signal boxes, amenities building and a turntable remained when Steam Incorporated acquired the site. New sheds were constructed to replace those demolished, and the Rail Air Shed & amenities buildings were acquired when it became available. While initially leasing a portion of the site, Steam Incorporated now owns the whole former depot site including the 70 ft turntable however the railways retain a right of access to the turntable.

As steam started to disappear from the NZR network, a group of enthusiasts united to preserve steam locomotives with the express intention of running them on the NZR main line network. At the time, all locomotives that had been preserved were solely for use on heritage railways or for static display, and as the NZR sold locomotives on the proviso that they would never again run on the NZR network, it was a radical concept. However Steam Incorporated was formed and locomotives were purchased by the society or for the society by members.

Steam Incorporated owns one of New Zealand's largest fleets of heritage passenger carriages certified for mainline operation on the regular national network. Originally painted in a unique chocolate brown livery with yellow lining to differentiate them from carriages in service on regular trains, the paint was found to fade and look shabby, and when Tranz Rail, NZR's successor, repainted their carriages in a blue livery in the early 1990s, Steam Incorporated reverted to the "Midland Red" paint scheme that had been used for most passenger carriages in New Zealand since the 1920s. Steam Incorporated own a variety of carriage types, such as five wide-bodied AA class 50 ft wooden passenger carriages with balcony ends. In 2008, these carriages were painted in "Pullman Green" for use in the North Island Main Trunk Railway centenary celebrations. In addition, Steam Inc. have a number of 50-foot and 56-foot steel-clad passenger carriages, one of which has been converted for use as a buffet/souvenir car. The active fleet stands at twelve fully restored and main line certified carriages, with one currently under restoration, one awaiting mainline certification and nine stored (4).

Along with carriages, the society owns a number of guards vans and former goods wagons, some of which are certified for main line operation as locomotive service wagons. 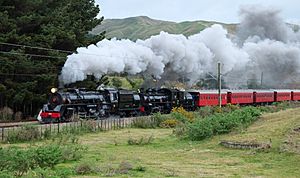 Steam Incorporated has operated or participated in excursions to almost all parts of the national railway network that has been open since the late 1970s. As one of the first organisations to operate a private carriage fleet, excursions have been run since 1978. During the early years of the society's existence, NZR would not permit heritage operators to use their own locomotives on the national network, thus limiting the society's locomotive activities to the area of The Engine Shed. Since 1985 however, this policy has been abandoned and Steam Incorporated have run the majority of their excursions using society owned Steam and Diesel locomotives. Popular excursions have been through the central North Island, annual "Art Deco" expresses to Napier, to the centennial celebrations at Dunedin Railway Station in 2006, and to the centennial celebrations at Feilding in 2008. Some excursions are operated solely by Steam Incorporated crews with the society's own equipment (with the locomotive driver and fireman supplied by Kiwirail), while others have been in conjunction with other New Zealand preservation societies and their locomotives, such as the "double drivers" excursions featuring two KA class locomotives.

Some of the more notable involvements Steam Incorporated have had were in 1993 when KA 945 and Steam Inc carriages toured for 3 weeks around New Zealand on the "Crunchie Train", and in 2008 when Steam Incorporated operated the Parliamentary Special NIMT Centennial train on behalf of ONTRACK, using primarily Steam Incorporated carriages and a mix of Steam Inc. and other mainline certified locomotives.

All content from Kiddle encyclopedia articles (including the article images and facts) can be freely used under Attribution-ShareAlike license, unless stated otherwise. Cite this article:
Steam Incorporated Facts for Kids. Kiddle Encyclopedia.