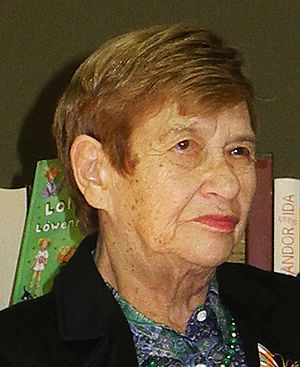 Stefanie Zweig (19 September 1932 – 25 April 2014) was a German writer. She was best known for her autobiographical novel, Nirgendwo in Afrika (Nowhere in Africa, 1998), based on her early life in Kenya. The novel was made into a movie and won an Academy Award in 2002 for Best Foreign Language Film.

Zweig was born in Leobschütz, Upper Silesia (now Poland). Her family was Jewish and fled Nazi Germany to Kenya.

All content from Kiddle encyclopedia articles (including the article images and facts) can be freely used under Attribution-ShareAlike license, unless stated otherwise. Cite this article:
Stefanie Zweig Facts for Kids. Kiddle Encyclopedia.