Steger is a village that straddles the border which separates Cook County and Will County, Illinois (Steger Road is the border line). It is 35 miles (56 km) south of Chicago and had a population of 9,584 at the 2020 census. 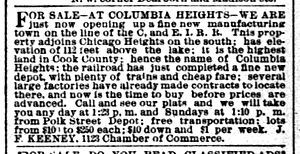 Classified ad from the Chicago Daily Tribune edition of October 25, 1891, offering real estate for sale in the newly developing community of Columbia Heights
The Steger Building 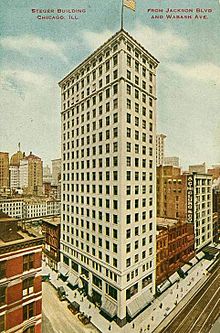 The Steger Building, 48 E. Jackson Blvd., Chicago, IL John Steger built this nineteen story skyscraper in downtown Chicago in 1910 to create a high-profile focus for Steger & Sons. The building was the first high-rise building designed by the prestigious architectural firm of Marshall and Fox and is today a designated Chicago landmark.

Steger was founded in 1891 by Chicago real estate interests and initially named Columbia Heights in honor of the 1893 World's Columbian Exposition which the City of Chicago had been preparing to host since 1889. The character, financial fortunes and even the name of the community were set immediately thereafter when John Valentine Steger began to build a piano factory there on a parcel of land south of Chicago Heights that was sited immediately west of the Chicago and Eastern Illinois Railroad tracks and bordered by the tracks, Vincennes Avenue (now Chicago Road) and 33rd and 34th Streets. This first building of the complex replaced Steger's original factory which had adjoined his showrooms at Wabash Avenue and Jackson Boulevard in downtown Chicago, which had a capacity of only two pianos per week. This new building was three stories tall, 40 x 225 and designed by the Chicago architectural firm Mayo and Curry to accommodate 200 workers. By 1904 the factory at Steger had grown to cover twenty-three acres and had a capacity of sixteen thousand pianos per year. A piano by the company was displayed at the World's Columbian Exposition, and the instrument was commented on as follows:

Any work dealing with the Piano Industries of this country would be incomplete did it not contain a reference to the celebrated Steger. The particular excellence of the Steger piano consists of its fine quality of tone, seldom found in other high-grade instruments; it is very musical, liquid, round, sufficiently brilliant to satisfy the most fastidious taste. The very finest material obtainable is used in all parts of the Steger, the one aim being to obtain excellence in every feature -- tone, touch, appearance and durability. The name Steger upon the piano is sufficient guarantee of its superior worth.

The company built exceptionally high quality pianos under several names and in a wide range of prices. They are quite rare today. For a time after 1896, Steger & Sons shared this block with another piano factory which produced instruments for the Smith and Nixon Piano Manufacturing Company of Cincinnati. It is interesting to note under the circumstances that for years after the community officially changed its name in 1896, Smith and Nixon continued to use the name Columbia Heights when referring to the location of its factory in Illinois. Smith and Nixon were gone from the area by 1911.

Steger was born in Ulm, Germany on March 24, 1854 and had learned the art of cabinetmaking there before coming to the United States in 1871 with 12 cents in his pocket. He died on June 11, 1916, after having created over time the largest piano manufactory in the world, which at one time employed 1,400 persons. The Steger family remained active in the community for many years. John's grandson Robert M. Steger was the president of the village's Chamber of Commerce in 1953 and led an ambitious effort that year to work "for a greater Steger"

The Village of Steger was incorporated in 1896 with 324 residents, at which time John Steger agreed to pay $400 toward incorporation costs with the understanding that the town would change its name to Steger, and he subsequently served two terms as the village's board president. He avoided the issues that had plagued George Pullman in his "model town" by encouraging private home ownership and commerce. By 1920, Steger was considered by some to be the "piano capital of the world", producing more than a hundred pianos a day. After changing American tastes diminished the demand for the piano the plant closed its doors in 1928, and the Amico Macaroni Company of Chicago Heights moved into a portion of the vacated building. In 1932 another section of the complex became the home of the Steger Furniture Company, who manufactured radio cabinets there for many years. In 1945, Steger Furniture was acquired by the automobile parts manufacturer Sparton Corporation, who had invented the first electric automobile horn in 1911 and the first all-electric radio after World War I. After a fire, the Steger Piano complex was demolished in the early 1970s.

Steger has been a regular stop on the annual "Driving the Dixie" event from the time it began. The drive involves participants travelling down the historic Dixie Highway in the Chicago Southland and visiting various communities along the way.

All content from Kiddle encyclopedia articles (including the article images and facts) can be freely used under Attribution-ShareAlike license, unless stated otherwise. Cite this article:
Steger, Illinois Facts for Kids. Kiddle Encyclopedia.