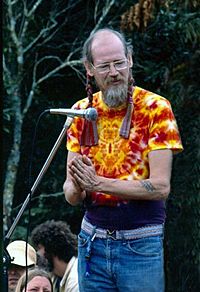 Stephen Gaskin (February 16, 1935 – July 1, 2014) was an American counterculture hippie icon. He was best known for co-founding "The Farm", a famous spiritual intentional community. He was also known for being in the Haight-Ashbury district of San Francisco, California in the 1960s.

Gaskin was born in Denver, Colorado. He was married to Ina May Gaskin. He had five children. He was in the US Marine Corps from 1952 to 1955.

All content from Kiddle encyclopedia articles (including the article images and facts) can be freely used under Attribution-ShareAlike license, unless stated otherwise. Cite this article:
Stephen Gaskin Facts for Kids. Kiddle Encyclopedia.