It was confiscated from Loyalist Jan Zabriskie, and served as a military headquarters through much of the Revolutionary War. General George Washington made it his headquarters, September 4 to 17, 1780. Following the war, it was given to Major General Baron von Steuben, who occupied it from 1783 to 1788.

The Steuben House has long been esteemed a Revolutionary landmark. Its architecture and historic furnishings recall the Bergen Dutch, an agricultural community whose language and culture blended contributions from Dutch, Angolan African, German, English, French, Scotch and Scandinavian settlers. At a place known originally as Aschatking (where the river narrows), about ten miles (16 km) above the head of Newark Bay, a Swedish land-clearer named Cornelius Mattyse acquired 420 acres (1.7 km2) at the juncture of Tantaqua's Creek (Cole's Brook) and the Hackensack River, in 1682. 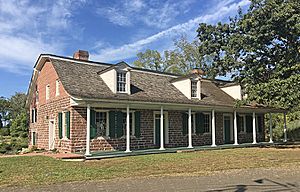 The Steuben House pictured in 2019

This was called Tantaqua's Plain, where a Hackensack sachem of that name resided with his kinfolk. David Ackerman, residing in the village of Hackensack, purchased the land from Matheus Corneliuson, son of Cornelius Matheus of Hackensack River, in 1695. He devised that portion of this tract of land lying east of Kinderkamack Road to his son, Johannes Ackerman, who built a dwelling on the Steenrapie (Kinderkamack) Road at the time of his marriage to Jannetje Lozier in 1713. A tidal gristmill was built on the Hackensack River. This mill got its power from an artificial pond: the high tide was trapped in the mouth of Cole's Brook by a dam with a special drop-gate, suspended from a horizontal timber. When the tides flowed out of the Hackensack River, the tidal millpond was slowly released through the waterwheel. Sloops pulled alongside the mill at New Bridge Landing. On March 9, 1744, a road was surveyed from Kinderkamack Road to the chosen spot on the banks of the Hackensack River where a "New Bridge" was to be erected (forming what is now Main Street, River Edge).

Jan and Annetje (Ackerman) Zabriskie purchased the Johannes Ackerman mill and farm in September 1745, shortly after construction of the first draw-bridge at the narrows of the Hackensack River. This wooden span was called New Bridge to distinguish it from an older crossing several miles upstream. In 1752, Jan Zabriskie built the oldest part of the Steuben House. Its walls were built with blocks of sandstone cut from the Kinderkamack Ridge - dressed stone on the two sides of the building facing the roadway and coursed rubble on the other sides. The front door opened into a center-hall. The Zabriskie family grew wealthy from increased trade brought on by the French and Indian War (1756–1763) and doubled the size of their dwelling about 1765, increasing it from five to twelve rooms, warmed by seven fireplaces, and covering it with a fashionable gambrel roof. The gambrel roof has four slopes instead of two, providing more headroom and storage space in the garret (for this reason, many barns used a gambrel roof to increase the size of the hay mow). The Jersey Dutch also adopted the gambrel roof to span the depth of a house that was one-and-a-half to two rooms deep. New Bridge Landing was the business center of the upper Hackensack Valley. Iron made in stone furnaces along the Ramapo Mountains was carried in ox-carts to New Bridge Landing where it was loaded onto sloops, some as large as 50 ton, for shipment to market. Flour and animal feed was shipped from the mill. All kinds of wares came in from boats returning from the city. This location had an added advantage: because of the wide Hackensack Meadowlands downstream, New Bridge remained the nearest river crossing to Newark Bay until 1790. Overland traffic including farm wagons and stage coaches, going to and from New York City, crossed the river at this spot on their way into the interior parts of the country.

The house was occupied as a military headquarters during much of the American Revolutionary War. General Washington headquartered here in September 1780 for 14 days when the Continental Army encamped on the Kinderkamack Ridge.

While a constant arena for conflict, the following significant Revolutionary War events are associated with Historic New Bridge Landing:

The State of New Jersey confiscated the stone mansion from Jan Zabriskie, a Loyalist, in 1781. The New Jersey Legislature gave the Zabriskie estate at New Bridge to Major General Baron von Steuben, the Inspector General of the Continental Army, on December 23, 1783 on condition that he occupy it and not rent it to a tenant. To meet these terms he had to keep a bed and servant at all times and make regular visits. His aide-de-camp, Captain Benjamin Walker, resided there, operating the mill and river dock in partnership with Jan Zabriskie. Captain Walker purchased the Zabriskie estate on Steuben's behalf in 1786. This is the only extant 18th century building that Steuben owned. Steuben renovated the war-damaged house and sold the house to back to the Zabriskie family, Jan, son of the Loyalist, in 1788. His grandson, John J. Zabriskie, died trying to free the mill waterwheel in 1793. Andrew Zabriskie, a cousin, purchased the Steuben House in 1815. His descendants owned the property until 1909. 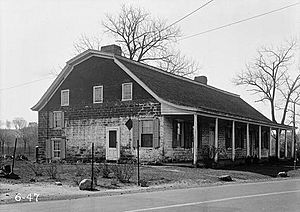 The Steuben House pictured in 1936

The Steuben House Commission was created in 1926 to purchase Baron Steuben's home at New Bridge. The State took possession of the historic mansion and 1-acre (4,000 m2) of ground for $9,000 on June 27, 1928. It was renovated and opened as the museum headquarters of the Bergen County Historical Society in September 1939. The Steuben House is listed on the New Jersey and National Register of Historic Places. The Bergen County Historical Society continued stewardship of the site by purchase of land between the Steuben House and the encroaching autoparts yard in 1944. In 1954, the Society was able to persuade the County of Bergen to divert the planned 4-lane highway to the north of the site instead of alongside the historic site. The highway bridge opened in 1956 and the one-lane 1889 swing bridge was closed to vehicles. It remains open for pedestrians. 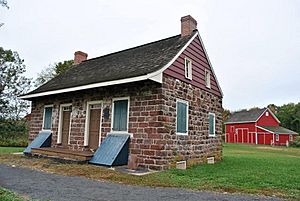 The house is now the cornerstone of this historic district, spanning both sides of the river. Three additional buildings were moved onto the adjacent property of the Bergen County Historical Society, a private non-profit volunteer organization. The Demarest House was moved here from New Milford in 1956 and is maintained by the Blauvelt Demarest Foundation. The Westervelt-Thomas Barn was relocated from Washington Township in 1958. The County of Bergen moved the Campbell-Christie House here to lands of the Bergen County Historical Society in 1977. The Society erected a working replica of a Bergen Dutch Out-Kitchen in 1991 and an outhouse in 2009.

The Steuben House suffered little in the way of permanent damage in the April 2007 nor'easter. However, Bergen County Historical Society collections that had been moved to the second floor in previous floods, had been left on the first floor. Thus, numerous artifacts were damaged or destroyed. Volunteers open the New Jersey State Historic site for special events.

All content from Kiddle encyclopedia articles (including the article images and facts) can be freely used under Attribution-ShareAlike license, unless stated otherwise. Cite this article:
Steuben House Facts for Kids. Kiddle Encyclopedia.