Beaufortia cyrtodonta, commonly known as Stirling Range bottlebrush, is a plant in the myrtle family, Myrtaceae and is endemic to the south-west of Western Australia. It is a compact shrub with crowded leaves which appear greyish due to their covering of fine, soft hairs. It has heads of red flowers in spring and occurs in the Stirling Range district.

Beaufortia cyrtodonta is a compact shrub which grows to a height of 1.5 metres (5 ft). The leaves are linear, crowded and arranged in alternate pairs (decussate) so that they make four rows along the stems. The leaves are linear to lance-shaped, 4–7 millimetres (0.2–0.3 in) long and often have a covering of fine hairs, giving them a greyish appearance. 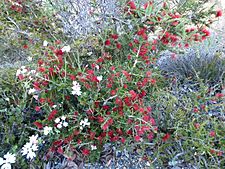 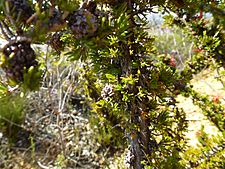 Beaufortia cyrtodonta mainly occurs in the Stirling Range district in the Avon Wheatbelt, Esperance Plains, Jarrah Forest and Mallee biogeographic regions. It grows in sandy and gravelly soils often derived from laterite on hills and outcrops.

Beaufortia cyrtodonta is classified as "not threatened" by the Western Australian Government Department of Parks and Wildlife.

All content from Kiddle encyclopedia articles (including the article images and facts) can be freely used under Attribution-ShareAlike license, unless stated otherwise. Cite this article:
Stirling Range bottlebrush Facts for Kids. Kiddle Encyclopedia.