Stonington is a town in Hancock County, Maine, United States. It's located on the southern portion of the island of Deer Isle. The population was 1,056 at the 2020 census. It includes the villages of Burnt Cove, Oceanville, Green Head, and Clam City. A picturesque working waterfront and tranquil tourist destination in eastern Penobscot Bay, Stonington has consistently ranked among the top lobster ports in the county and is the largest lobster port in Maine. In 2011, 14,854,989 pounds of lobster were landed by Stonington fishermen with a value of $46.3 million.

The first people to live on Deer Isle, as early as 6,100 years ago, were Native Americans. Their descendants were known to early French explorers as Etchemins; some continued to live on the island even after Anglo-Americans established settlements. The first European to venture into the region was Estevan Gomez, a Portuguese working for the Spanish Crown. Gomez sailed his ship La Anunciada up Eggemoggin Reach, which divides Deer Isle from the mainland. The French, however, would be the most active in the region, establishing a fort in Castine and intermarrying with Abenaki natives. A body buried in full armor (believed to be French) was discovered on nearby Campbell Island.[1]

Toward the end of the French and Indian War, Deer Isle was settled by New England colonists around 1760. From Berwick came descendants of Scots Covenanter George Gray, a prisoner of war taken at the 1650 Battle of Dunbar and shipped to America, his grandchildren (Joshua and Andrew) populated the area. Sailors on the island became noted for maritime skills, some even serving as crew in the America's Cup Races of 1895 and 1899. Ironically, their ancestors hadn't come looking for a life on the sea, but on the land. Following a southerly migration from the mainland above, the first settlers established farms and built cabins on the northern part of Deer Island. On the southern part, Green's Landing (as Stonington was initially known) would be settled after 1800.[2]

Soil became exhausted from over farming and deforestation, so inhabitants of Deer Isle took to the sea. They became active in shipbuilding, seafaring and fishing. Green's Landing, a sparsely populated fishing village, didn't change much until the granite boom after 1870, when quarrying became a major occupation. Stone excavated here was used to build important structures across the country, including the Museum of Fine Arts, Boston. Europeans, mainly from Italy, were imported as stonecutters. Some were housed in barracks on Crotch Island, while others lived in hotels and large boarding houses built for that purpose. Many of the original buildings have been transformed since into restaurants, galleries and shops.[3]

On February 18, 1897, Green's Landing was set off and incorporated by the Maine State Legislature as Stonington, named for its granite quarries. To the west of the main harbor lies Steamboat Wharf, now home to the Isle au Haut Boat Company. Prior to that it was a sardine factory. Before the Deer Isle-Sedgwick Bridge connected to the mainland in 1939, the wharf was an essential link to Deer Isle in general, and Stonington in particular. Steamboats arrived daily from ports such as Rockland, transporting freight and passengers from as far as Boston. The harbor has long been filled with Friendship Sloops, which are powered by sail only. Lobstermen once used them to haul traps. Most of their trips were to the outer islands (like York Island) near Isle au Haut, fishing during the week and returning to the harbor on weekends. This changed with the advent of gasoline or diesel engines, along with new hull designs, which enabled fishermen to make day trips to fishing grounds in Penobscot Bay.[4]

Stonington is the terminus of State Route 15, which passes through the town of Deer Isle and across the Deer Isle Bridge to the mainland. 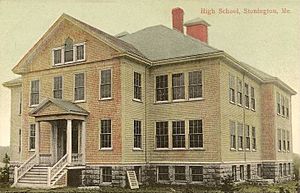 There were 515 households, of which 19.8% had children under the age of 18 living with them, 48.7% were married couples living together, 7.2% had a female householder with no husband present, 3.3% had a male householder with no wife present, and 40.8% were non-families. 34.2% of all households were made up of individuals, and 14.2% had someone living alone who was 65 years of age or older. The average household size was 2.03 and the average family size was 2.56.

All content from Kiddle encyclopedia articles (including the article images and facts) can be freely used under Attribution-ShareAlike license, unless stated otherwise. Cite this article:
Stonington, Maine Facts for Kids. Kiddle Encyclopedia.