The Straight Street Bridge is a vehicular bridge over the Passaic River in Paterson, New Jersey, that is listed on the National Register of Historic Places.

The single span Pennsylvania (petit) truss bridge on brownstone ashlar abutments. It was completed in 1907, using the substructure which had been built for an earlier bridge that had washed away in Passaic River Flood of 1903. The truss type was originally designed for the Pennsylvania Railroad to support the heavy loads required for rail traffic and were seldom used on roads, the industrial setting of Paterson at the time influenced the decision to build a stronger bridge at that location. 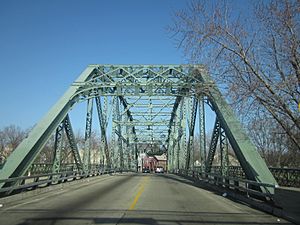 Roadway view of bridge from its southeast end, 2012

A historic rehabilitation of the bridge completed in 2003 by the New Jersey Department of Transportation (NJDOT) with little visible change to the superstructure while components below the bridge deck and the cantilevered sidewalks were replaced. Round headed bolts replaced deteriorated rivets, a hollow steel rail barrier to protect the trusses was used in place of standard guide rail and historic style light fixtures were installed. Deteriorated elements were replaced and the original sidewalk railing was sandblasted, painted and re-installed.

All content from Kiddle encyclopedia articles (including the article images and facts) can be freely used under Attribution-ShareAlike license, unless stated otherwise. Cite this article:
Straight Street Bridge Facts for Kids. Kiddle Encyclopedia.