Streptopus lanceolatus (rose twisted stalk, rosybells, rose mandarin, scootberry, liverberry, rose-bellwort), is an understory perennial plant native to the forests of North America, from Alaska to Labrador, south through the Great Lakes and Appalachian Mountain regions of the United States, as well as Montana, Washington state, Oregon, and St. Pierre & Miquelon. It grows primarily in mixed-wood forests, and throughout a wide range of soil and site conditions, preferring cool, acidic soils.

Streptopus lanceolatus grows from a rhizome or seed, the stem having a zigzag shape, branched or sometimes unbranched. Up to 30 cm (12 in) tall with alternate wide lanced oval-shaped leaves with pointed tips and a rounded base, without leaf-stalks. The leaves are often finely toothed having fine hairs on the underside veins. Flowers appear as solitary individuals opposite each leaf in early summer (May to July) and are bell-shaped on 1–3 cm (0.4–1.2 in) long stalks bent midway, with 6 rose or white recurved petals with purple streaks. Fruit is an elongated red berry ripening in mid-summer (July to August). If berries are consumed in quantity, diarrhea can result. 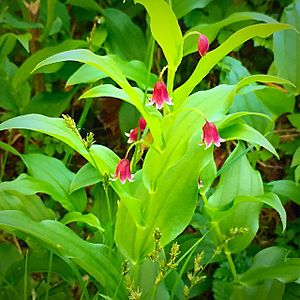 All content from Kiddle encyclopedia articles (including the article images and facts) can be freely used under Attribution-ShareAlike license, unless stated otherwise. Cite this article:
Streptopus lanceolatus Facts for Kids. Kiddle Encyclopedia.