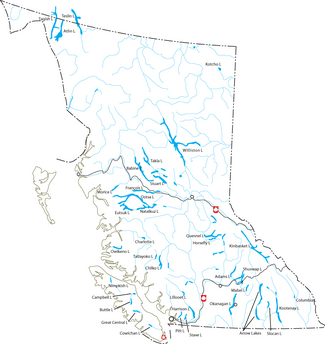 Stuart Lake, or Nak'albun ("Mount Pope Lake") in the Carrier (Dakelh) language is a lake situated in the Northern Interior of British Columbia, Canada. The town of Fort St. James is situated by the lake near the outlet (Stuart River or Nak'alkoh - ″Mount Pope River″). Stuart Lake is 66 km long, 10 km wide and relatively shallow, with an average depth of 26 m.

Hydrographical characteristics of the lake

Villages on Stuart Lake or Nak'albun, were connected to Dakelh villages on Fraser Lake (Nadlehbunk'ut) on an ancient land route called Nyan Wheti Nyan Wheti in Carrier means "The Way Across." The trail was part of the network of trails called the Grease Trail used by the Dakelh people for as a major trade, travel and communication line. the Cheslatta Trail continues south to Cheslatta Lake.

Stuart Lake is important to British Columbia history, being the location of one of the oldest non-native settlements in the province, Fort St. James. The first non-native to visit the lake was James McDougall in 1806. McDougall's explorations were undertaken as an assistant to Simon Fraser. Fraser and other members of his expedition soon established a North West Company trading post, leaving behind for the winter a garrison led by clerk John Stuart, in whose honor the English name of the lake was given.

The original name, in the Dakelh language, is Nak'albun, literally Mt. Pope Lake, after the mountain that overlooks it, Nak'al, known in English as Mt. Pope. The changing of names of the lakes reflects the doctrine of discovery upheld by Canada's colonial government as well as the colonial history of the area.

In 2012, the "Mayor and Council of the District of Fort St. James unanimously voted to adopt a resolution declaring their opposition to the Enbridge Northern Gateway Project." Their decision was based on concerns for "the land base and our fresh water sources. Of particular concern locally is the crossing of the Stuart River, which accommodates one of the largest sockeye salmon runs in the world, and Pitka Creek which flows into Stuart Lake."

All content from Kiddle encyclopedia articles (including the article images and facts) can be freely used under Attribution-ShareAlike license, unless stated otherwise. Cite this article:
Stuart Lake Facts for Kids. Kiddle Encyclopedia.