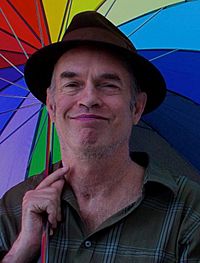 Stuart Timmons (January 14, 1957 – January 28, 2017) was an American journalist, activist, and historian. He was an award-winning author specializing in LGBT history. He was the author of The Trouble With Harry Hay: Founder of the Modern Gay Movement. In 2007, Stuart began developing walking tours of LGBTQ historic sites in Los Angeles.

Timmons was born in Minneapolis, Minnesota. He studied at the University of California, Los Angeles. In 2008, he suffered a massive stroke that left him paralyzed from the waist down.

Timmons died on January 28, 2017 at a hospital in Hollywood, California from cardiac arrest, at the age of 60.

All content from Kiddle encyclopedia articles (including the article images and facts) can be freely used under Attribution-ShareAlike license, unless stated otherwise. Cite this article:
Stuart Timmons Facts for Kids. Kiddle Encyclopedia.