Styracosaurus was a genus of herbivorous ceratopsian dinosaur from the Upper Cretaceous, about 76.5 to 75 million years ago. 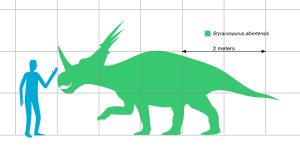 Individuals of the genus Styracosaurus were approximately 5.5 metres (18 ft) long as adults and weighed around 2.7 tonnes. The skull was massive, with a large nostril, a tall straight nose horn, and a parietosquamosal frill (a neck frill) crowned with at least four large spikes. Each of the four longest frill spines was comparable in length to the nose horn, at 50 to 55 centimetres (20 to 22 inches) long. The nasal horn was estimated by Lambe at 57 centimeters (22 inches) long in the type specimen, but the tip had not been preserved. Based on other nasal horn cores from Styracosaurus and Centrosaurus, this horn may have come to a more rounded point at around half of that length. 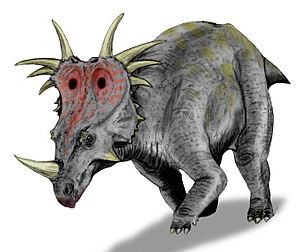 Aside from the large nasal horn and four long frill spikes, the cranial ornamentation was variable. Some individuals had small hook-like projections and knobs at the posterior margin of the frill, similar to but smaller than those in Centrosaurus. Others had less prominent tabs. Some, like the type individual, had a third pair of long frill spikes. Others had much smaller projections, and small points are found on the side margins of some but not all specimens. Modest pyramid-shaped brow horns were present in subadults, but were replaced by pits in adults. Like most ceratopsids, Styracosaurus had large fenestrae (skull openings) in its frill. The front of the mouth had a toothless beak.

The bulky body of Styracosaurus resembled that of a rhinoceros. It had powerful shoulders which may have been useful in intraspecies combat. Styracosaurus had a relatively short tail. Each toe bore a hooflike ungual which was sheathed in horn.

Various limb positions have been proposed for Styracosaurus and ceratopsids in general, including forelegs which were held underneath the body, or, alternatively, held in a sprawling position. The most recent work has put forward an intermediate crouched position as most likely.

All content from Kiddle encyclopedia articles (including the article images and facts) can be freely used under Attribution-ShareAlike license, unless stated otherwise. Cite this article:
Styracosaurus Facts for Kids. Kiddle Encyclopedia.