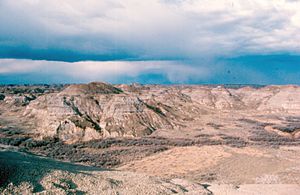 The Dinosaur Park Formation is a group of rock layers in Alberta, Canada. It contains many fossils from the "Age of Dinosaurs", the Upper Cretaceous.

The uppermost member of the Belly River Group (or Judith River Group), is a major geologic unit in southern Alberta. It was deposited during the Campanian stage of the later Cretaceous, between about 76.9 and 75.8 million years ago. It was deposited in alluvial and coastal plain environments. There, a fast-flowing river spread out over a flat plain. At this time, the continents were still quite close together, and tropical climates were usual.

These rocks have a nonmarine Oldman Formation below and the marine (saltwater) Bearpaw Formation above. So they were low-lying and often submerged.

The Dinosaur Park Formation contains dense concentrations of dinosaur skeletons, both articulated and disarticulated. They are often found with preserved remains of soft tissues. Remains of other animals such as fish, turtles, and crocodilians, and plants, are also abundant. The formation has been named after Dinosaur Provincial Park, a UNESCO World Heritage Site where the formation is well exposed in the badlands that flank the Red Deer River.

All content from Kiddle encyclopedia articles (including the article images and facts) can be freely used under Attribution-ShareAlike license, unless stated otherwise. Cite this article:
Dinosaur Park Formation Facts for Kids. Kiddle Encyclopedia.