Kids Encyclopedia Facts
Not to be confused with Summerville (Augusta, Georgia).

Summerville is a city and the county seat of Chattooga County, Georgia, United States. The population was 4,534 at the 2010 census. 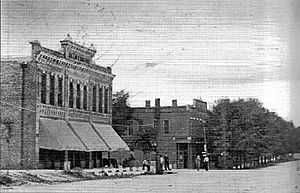 Hollis and Hinton store on Commerce Street, circa 1911

Summerville was founded in 1838 as seat of the newly formed Chattooga County. It was incorporated as a town in 1839 and as a city in 1909. Summerville was named from the fact it was a popular summer resort.

According to the United States Census Bureau, the city has a total area of 4.0 square miles (10.3 km²), all of it land.

Public education in Summerville is administered by the Chattooga County School District. The district operates four elementary schools, one middle school, and one high school. The district has 184 full-time teachers and over 2,834 students.

All content from Kiddle encyclopedia articles (including the article images and facts) can be freely used under Attribution-ShareAlike license, unless stated otherwise. Cite this article:
Summerville, Georgia Facts for Kids. Kiddle Encyclopedia.