The Sunsphere, located in World’s Fair Park in downtown Knoxville, Tennessee, is a 266 ft (81 m) high hexagonal steel truss structure, topped with a 75 ft (23 m) gold-colored glass sphere that served as the symbol of the 1982 World's Fair.

Designed by the Knoxville-based architectural firm, Community Tectonics, the Sunsphere was created as the theme structure for the 1982 World's Fair. It was noted for its unique design in several engineering publications.

The World's Fair site later became a public park, the World's Fair Park, alongside Knoxville's official convention center and adjacent to the University of Tennessee's main campus. The Sunsphere remains standing directly across a man-made pond from the Tennessee Amphitheater, the only other structure remaining from the 1982 World's Fair.

During the fair it cost $2 to take the elevator to the tower's observation deck. The tower served as a restaurant and featured food items such as the Sunburger and a rum and fruit juice cocktail called the Sunburst. In the early morning hours on May 12, 1982, a shot was fired from outside the fair site and shattered one of the sphere's windows. No one was ever arrested for the incident.

The Sunsphere has been used as a symbol for Knoxville, appearing in postcards and logos. Between 1993 and 1999, the Sunsphere was featured in part on the logo for the Knoxville Smokies minor league baseball club. The 2002 AAU Junior Olympics mascot Spherit took its inspiration from the landmark. It featured red hair and a body shaped like the Sunsphere. On Sunday, May 15, 2000, nuclear weapons protesters scaled the tower and hung a large banner that said "Stop the Bombs." They remained on the tower for three days before surrendering to police. The Sunsphere is also featured in the logo for the Hard Knox Roller Girls women's flat-track roller derby league and their mascot, Sphere This also took its inspiration from the Knoxville landmark. The Sunsphere was highlighted in the seventh season episode of animated TV sitcom The Simpsons titled "Bart on the Road" and was renamed the wig sphere due to its use as a storage facility for wigs.

In 2011, a drawing of the Sunsphere – alongside images of iconic structures from Tennessee's three other large cities (the Memphis Pyramid, Nashville's AT&T Building, and the Tennessee Aquarium of Chattanooga) – was incorporated into the standard design of Tennessee's state-issued driver's licenses. 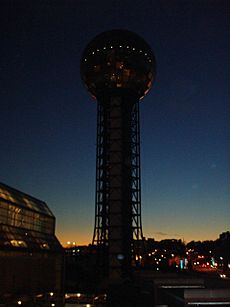 The Sunsphere at night, with the Knoxville Convention Center visible in the foreground

Although the Sunsphere is the most recognized feature of the Knoxville cityscape, it has remained vacant or underutilized for most of its post-fair life. Various proposals have been submitted to the city from time to time for its redevelopment. Many argue its relevancy as a tall structure, because it was built in one of the lowest parts of the city.

In March 1991, officials from the Pensacola Tornados of the Continental Basketball Association were looking at Knoxville for possible location and said of the Sunsphere as potential office space, "What better place for basketball offices than a giant gold basketball in the sky."

The Level 4 observation deck was reopened July 5, 2007, to give visitors a view of Knoxville. The observation deck can hold 86 people. At the time of its reopening, Level 5 became a cafe with concession and an early evening drinks service. Level 6 served as an open space leased out for functions. As of October 2013, both the 7th and 8th floors are available for commercial rental.

On August 27, 2008, the 5th floor was opened as the SkyBox bar and lounge. It eventually closed, however, and real estate investor Tony Capiello opened Icon Ultra Lounge in its place, investing $450,000.

In June 2013, a patron accidentally broke an inside window; nobody was hurt. On November 13, 2013, it was announced that Visit Knoxville would update and renovate the 4th floor of the observation deck.

All content from Kiddle encyclopedia articles (including the article images and facts) can be freely used under Attribution-ShareAlike license, unless stated otherwise. Cite this article:
Sunsphere Facts for Kids. Kiddle Encyclopedia.