The fair was constructed on a 70-acre (280,000 m2) site between Downtown Knoxville and the University of Tennessee campus. The core of the site primarily consisted of a deteriorating Louisville and Nashville Railroad yard and depot. The railroad yard was demolished, with the exception of a single rail line, and the depot was renovated for use as a restaurant during the fair. The Sunsphere, a 266-foot (81 m) steel tower topped with a five-story gold globe, was built as the main structure and symbol for the exposition. Today, the Sunsphere stands as a symbol for the city of Knoxville. 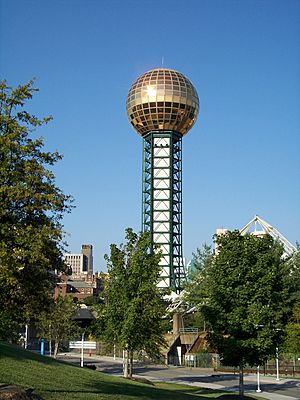 Knoxville Mayor Kyle Testerman appointed local banker Jake Butcher to lead an exploratory committee. Butcher served as one of the main driving forces behind the fair. Within the city, Knoxvillians referred to the fair as "Jake's Fair". An administrative body known as the Knoxville Foundation Inc. was established to organize and operate the event. There was skepticism, both locally and nationally, about the ability of Knoxville, described as a "scruffy little city" by The Wall Street Journal in a 1980 news article, to successfully host a World's Fair.

This controversy contributed to the development of the term “Scruffy City,” as a nickname synonymous with Knoxville. 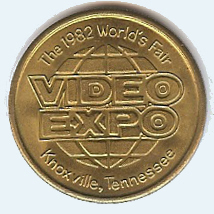 On May 1, 1982, the 1982 World's Fair opened to a crowd of 87,000 with the theme "Energy Turns the World." Television commercials broadcast prior to the fair used the marketing tagline "You've Got To Be There!" The opening ceremony was broadcast on local and regional television stations, with President Ronald Reagan arriving to open the fair. Television personality and Winchester native Dinah Shore was the master of ceremonies for the fair, and musical artists such as Porter Wagoner and Ricky Skaggs performed as the gates opened. A six-month pass to the fair sold for $100 (equivalent to $221 in 2018).

From its commencement on May 1, to its closing on October 31st, the fair attracted 11,127,780 visitors from all over the United States and the world, making it the 5th-best attended World's Fair in U.S. history among those sanctioned by the BIE. It had the highest attendance among the four Specialized Expos held in the United States. It made a profit of $57, far short of the $5 million surplus projected by organizers and boosters. The city of Knoxville was left with a $46 million debt. This debt would be paid in full in May 2007.

The Peruvian exhibit featured a mummy that was unwrapped and studied at the fair. The Egyptian exhibit featured ancient artifacts valued at over US$30 million. Hungary, the home country of the Rubik's Cube, sent the world's largest Rubik's Cube with rotating squares for the entrance display to its pavilion. The Rubik's Cube remains in World's Fair Park, where it has been displayed in the lobby of the Holiday Inn located adjacent to World's Fair Park. Every night of the fair, at 10 pm, a 10-minute fireworks display was presented that could be seen over much of Knoxville.

The Pittsburgh Steelers and the New England Patriots played a preseason football game at Neyland Stadium on August 14, 1982. The Steelers won the game 24–20.

A TV station, KM2XKA on Channel 7, was built for the fair, initially specializing in World's Fair information. It later converted to DTV-only WMAK, an independent station.

Oil corporation Texaco showcased the concept of pay at the pump, as part of the advances in energy.

The Knoxville-based fast food chain, Petro's Chili & Chips made their debut at the fair. Today, the chain consists of several locations in the state with most primarily located in East Tennessee.

Hotels and other accommodations in Knoxville were not permitted to take reservations directly. Room reservations for everything from hotels to houseboats were sold in a package with fair admission tickets through the first eleven days of the fair, and were handled by a central bureau, Knoxvisit. Its financial and administrative troubles resulted in reservations being taken over by PLM. It also struggled with the operation and filed for bankruptcy.

Jake Butcher's financial services corporation, United American Bank failed shortly after the exposition in 1983. On February 14, 1983, the Federal Deposit Insurance Corporation seized control of the bank due to irregularities in its financial records. This action caused public speculation that the bank's failure was due in part to Butcher's financing of the World's Fair. 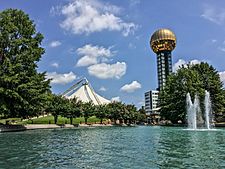 World's Fair Park as of the present day, with the Sunsphere and Tennessee Amphitheater in the background

Given the success of the fair, Knoxville residents speculated that the fair would put the city on track to become a major hub city in the Southeastern United States such as Atlanta or Charlotte. However, growth in Knoxville was relatively low compared to that of Chattanooga, which received national attention for its riverfront redevelopment projects.

In 1991, the city of Knoxville demolished the U.S. Pavilion in a controlled demolition. It had developed structural problems that could not be safely resolved after years of neglect. The site of the pavilion was cleared and developed for a parking lot along Cumberland Avenue, adjacent to the site of the Knoxville Convention Center in World's Fair Park.

The site of the Korean and Saudi Arabian pavilions and the Tennessee Gas Industries exhibit was converted into a performance lawn, and was host to a regular concert series for eight years. The site of the Japanese Pavilion became the new location for the Knoxville Museum of Art. The Elm Tree Theater located adjacent to the former pavilion was added as part of the Knoxville Museum of Art's courtyard. The elm tree was later struck by lightning and was cut down. The courtyard of the theater has since remained empty. Many of the pavilion sites and the fair's midway located south of the main park were given to the University of Tennessee for future campus extensions and student parking.

In 1996, Knoxville and the 1982 World's Fair were featured prominently in an episode of The Simpsons, "Bart on the Road". In the episode, Bart and his friends travel to Knoxville to visit the fair after seeing an advertisement in a tourism brochure, only to learn that it closed a decade before. The episode ends with Nelson throwing a stone at the Sunsphere, causing it to collapse on a car that the group had rented.

In 2000, the park was closed for two years for the construction of the Knoxville Convention Center in the space formerly occupied by Rich's/Millers Garage, the site of the KUB Substation exhibit, and the site of America's Electric Energy Exhibit.

The Tennessee Amphitheater, the only structure other than the Sunsphere that remains from the World's Fair, was condemned to demolition in 2002. Popular sentiment supported restoring it, and the theater was renovated between 2005 and 2007, reopening in 2007. In 2007, the amphitheater was voted one of the top fifteen architectural works of East Tennessee by the East Tennessee chapter of the American Institute of Architects.

In the summer of 2002, the World's Fair Park was reopened to general events and concerts, such as Earth Fest and Greek Fest. An Independence Day celebration is held on the park lawns every year, with the Knoxville Symphony Orchestra playing a free concert with a massive fireworks display. In May 2007, the East Tennessee Historical Society opened a temporary exhibit in its museum located in Downtown Knoxville, commemorating the 25th anniversary of the World's Fair. On July 4, 2007, one of the annual celebrations was held in conjunction with festivities commemorating the 25th Anniversary of the 1982 World's Fair. The following day, July 5, 2007, the Sunsphere's observation deck reopened to the public after renovations.

Many collectible items were made specifically for the World's Fair, ranging from cups, trays, plates, belt buckles, and several other objects. Some of the more notable items include:

All content from Kiddle encyclopedia articles (including the article images and facts) can be freely used under Attribution-ShareAlike license, unless stated otherwise. Cite this article:
1982 World's Fair Facts for Kids. Kiddle Encyclopedia.