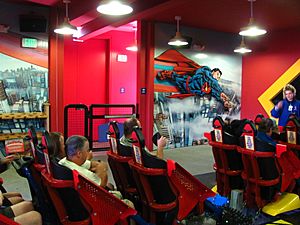 On August 21, 2011, Six Flags Discovery Kingdom posted on their official website a picture of a man in front of the building, stating "Can you keep a Secret?", with a hint stating, "It is bigger than a breadbox, smaller than Rhode Island, and it's coming in 2012. So get ready for the kind of over-the-top, upside-down, screaming excitement that only Six Flags Discovery Kingdom can offer. Find out more on September 1". On August 27, 2011, the park stated on their Facebook page that they would be announcing their 2012 attraction on September 1. On September 1, 2011, Six Flags Discovery Kingdom officially announced Superman: Ultimate Flight, a Premier Rides launched roller coaster. Superman: Ultimate Fight replaced Pandemonium, a Gerstlauer spinning coaster that has operated at the park since 2008.

Before being transferred to the park, parts of the coaster were manufactured in Salt Lake City, Utah. On March 27, 2012, Six Flags Discovery Kingdom posted on Facebook that the "first of many" track pieces has arrived at the park. Captain Lee, the media spokesman of the park posted on Twitter that the first supports for the coaster has arrived overnight of March 29. The first half of the one and only train was put on the track of the coaster on May 25, 2012. Discovery Kingdom posted on May 30 the opening of the coaster on their website to be set on Friday, June 22, 2012, before being taken down a couple days later. The ride's track was completed on June 6, 2012. Testing began on Superman: Ultimate Flight on June 15, 2012. The ride opened to the public on June 30, 2012.

On July 29, 2012, Superman: Ultimate Flight's train stalled, stranding twelve riders 150 feet (46 m) in the air for nearly two hours. Vallejo firefighters were dispatched to the scene and a crane equipped with a large personnel bucket was used to lift two firefighters and a park mechanic to the stalled train. The park mechanic managed to unlock the train, allowing the train to roll backwards and safely lower the riders back to the station. None of the riders were injured. The ride was closed for several days as it underwent a "thorough safety inspection". It reopened shortly thereafter.

Superman: Ultimate Flight launches out of the station rising up halfway up the first twist. It then returns backwards through the station into the non-inverting loop. Returning forwards and accelerating riders to a top speed of 62 miles per hour (100 km/h). It then travels up to a height of 150 feet (46 m) where it completes a heartline roll (ranking it among the tallest inversions in the world) before exiting in a second non-inverting half-loop at 133 feet (41 m). It then enters the second twist and returns to the station. The ride can be compared to several of Maurer Söhne's X-Coasters. The non-inverting loop element was previously only found in two of the company's X-Car roller coasters prior to Premier Rides' installation of Superman: Ultimate Flight. Additionally, the ride bears several similarities to the SkyLoop model including design, height and speed. On speakers outside the attraction entrance, John Williams' score is played in a loop.