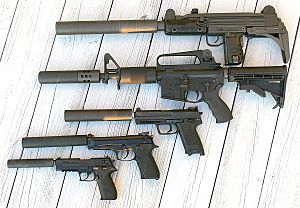 A suppressor, often called a "silencer" is a device used to make a gun less loud. Suppressors are most often added to the gun barrel, usually by screwing the silencer onto the end of the barrel. Some guns have a built-in suppressor.

Even though many people use the name "silencer" when talking about a suppressor, it does not really make the gun silent. How much the sound is reduced depends both on the cartridges and the suppressor. A suppressed firearm usually produces between 120 to 135 decibels (dB), which is much quieter than without the suppressor, but is still loud enough to cause hearing loss without additional protection such as earplugs. An unsuppressed firearm usually produces 140 to 165 dB. For comparison, a typical jackhammer produces about 130 dB.

In many places, suppressors are illegal to own except for the military and police. This is because suppressors make guns quieter and people worry this could help criminals commit crime.

In most states in the United States, suppressors are legal for civilians to own, but the National Firearms Act requires that buyers must undergo an extensive background check and pay a $200 tax. Possession of an untaxed suppressor is illegal, except for licensed class 3 firearms dealers, the military, and law enforcement.

All content from Kiddle encyclopedia articles (including the article images and facts) can be freely used under Attribution-ShareAlike license, unless stated otherwise. Cite this article:
Suppressor Facts for Kids. Kiddle Encyclopedia.