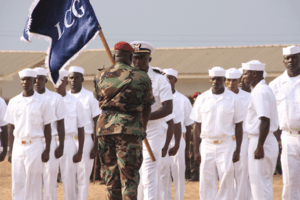 Suraj Alao Abdurrahman (9 September 1954 – 28 January 2015) was a Nigerian architect, engineer officer of the Nigerian Army. He served as Command Officer in Charge of the Armed Forces of Liberia (AFL) in Liberia. He was married and had four children.

Abdurrahman died of an illness in a hospital in New York, United States, aged 60.

All content from Kiddle encyclopedia articles (including the article images and facts) can be freely used under Attribution-ShareAlike license, unless stated otherwise. Cite this article:
Suraj Abdurrahman Facts for Kids. Kiddle Encyclopedia.