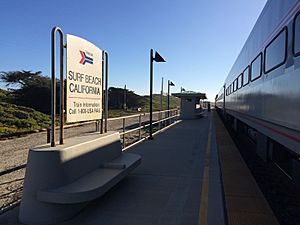 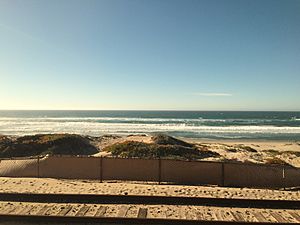 Surf Beach as seen from the Amtrak Pacific Surfliner

Surf is an unincorporated community in Santa Barbara County, California. It lies on the Pacific coast on Vandenberg Air Force Base west of the city of Lompoc. The community is the site of Surf Beach and the Surf Amtrak Station. California State Route 246 used to run to Surf, but in 1984 the highway was truncated at Lompoc; the road from Lompoc to Surf is now West Ocean Avenue.

Surf grew as a railway town after Southern Pacific Railroad built a station here for its Coast Line in 1900. In 1909, the schooner cargo ship Sibyl Marston sank off the coast south from Surf. The station at Surf became popular with U.S. Army soldiers stationed at Camp Cooke (now Vandenberg Air Force Base) during World War II. The population of the town peaked at 40, with most residents being employed with the railroad. As trains modernized, Surf experienced depopulation, to the point where Southern Pacific was only operating a telegraph station. The telegraph station closed in 1985, and it was not until 2000 that the current Surf Amtrak Station was completed. The unstaffed Amtrak station is currently the only structure left standing in Surf.

Sections of Surf Beach are closed between March 1 and September 30 every year during the nesting season of the western snowy plover. The closures are in place to protect the bird under the Endangered Species Act. If a set number of trespass violations have been reached during any nesting season (currently 50), the beach is closed entirely.

Two fatal shark attacks have occurred near Surf Beach: one on October 22, 2010, and the other on October 23, 2012. Travel + Leisure has listed it as one of the worst beaches for shark attacks.

All content from Kiddle encyclopedia articles (including the article images and facts) can be freely used under Attribution-ShareAlike license, unless stated otherwise. Cite this article:
Surf, California Facts for Kids. Kiddle Encyclopedia.