The railroad converted the hotel into offices and sleeping quarters for railroad personnel c. 1903. Alterations were made to the building in 1913 and 1917. The Erie Railroad merged into the Erie Lackawanna Railroad in 1960, which ended passenger train service over the former Erie Delaware Division through Susquehanna in 1966. The last passenger trains were the Atlantic Express/Pacific Express and unnamed trains to Binghamton timed to meet up with the Phoebe Snow. All remaining passenger service on the former Lackawanna route via Scranton, Pennsylvania, was discontinued on January 6, 1970. The station was listed on the National Register of Historic Places in 1972.

The New York, Lake Erie and Western Railway constructed the railroad through a dense forest in 1848 as a central spot for their work between Piermont and Dunkirk, New York. At that point, the village was nameless and had only one farm on the land nearby. That year, the railroad purchased 300 acres (120 ha) along the Susquehanna River for repair shops and other necessary facilities. Constructed at Susquehanna included the large machine shop (774 feet (236 m) by 138 feet (42 m)) with room for up to 40 locomotives, the boiler shop, blacksmith's shop, pattern shop, paint shop, foundry and engine rooms for those. The facilities included a larger lecture hall for workers, with a capacity of 600 people.

The Erie also constructed the Starrucca House, which contained a dining hall that was 120 feet (37 m) by 40 feet (12 m) was a hotel for passengers. The construction of the Starrucca House was necessary for a layover stop for engines coming out of Gulf Summit, New York that had to deal with the steep grade. The depot could feed 200 people and keep room as a hotel for the same number of people. This was the first depot constructed entirely out of brick in the United States, containing a 2,400 volume library, a reading room and the lecture room.

By 1863, the shops in Susquehanna employed 700 men (up from the original 350) in the community with $38,000/year average salary. The master mechanic of the shops, James Gregg worked to renovate and improve the shops, which were consistent fire risks. Construction of the shops began that year at the cost of $1.25 million (1865 USD) along with $500,000 in tools and machinery along 8 acres (3.2 ha).

In March 1874, the Erie fell behind paying the workers at the Susquehanna shops. On March 15, the day the railroad promised that they would pay their workers, they announced that finances were even worse and would have to delay the payment until March 25. The workers at the shop agreed with the delay, but that they were willing to walk off the job on March 25 if they were not paid. That day, the Erie announced that they had to pay workers in other parts of the railroad. Denied their wages, the railroad shop workers told the managers to leave the premises and took over the facilities. They demanded that if the railroad did not pay within 24 hours, they would begin to stop trains from running. 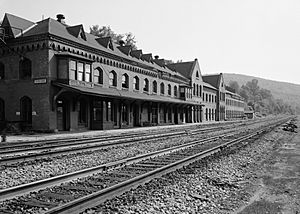 The railroad responded by firing the leaders of the strike at Susquehanna, which caused things to get worse. The shop workers disabled locomotives and put them in a roundhouse and stranding cars of coal and fuel on sidings in the area. Workers kept mechanical pieces of engines hostage and put them elsewhere in the town. The railroad was on the attack end of the media and the government, who sympathized with the workers. M.M. Helme, the local Sheriff refused to have the strikers chased off the property. The Governor of Pennsylvania, John F. Hartranft told the railroad that only the Sheriff could request state troops to come in and the latter denied doing so, along with several leading citizens of the village.

The lawyers of the railroad soon learned that the trains down the line were being affected by the strike, causing Helme to call in troops. The railroad offered that in ending the strike, all but the spokespeople for the strike would get their jobs back, which was denied. With that denial, the railroad threatened to move their shops to Elmira, New York, which would affect the local economy, causing their support to dwindle further. The strike ended within hours of that, with workers returning to their jobs.

All content from Kiddle encyclopedia articles (including the article images and facts) can be freely used under Attribution-ShareAlike license, unless stated otherwise. Cite this article:
Susquehanna station Facts for Kids. Kiddle Encyclopedia.