The Swedes in Omaha, Nebraska are a long-standing ethnic group in the city with important economic, social, and political ties. 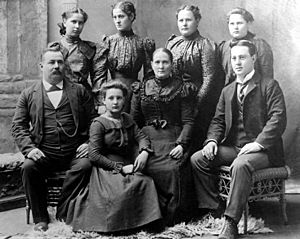 Anna Truedsdotter Hansen (1851-1922) was born in Hässleholm Municipality - with her German husband she brought six children up in Omaha in the 1890s, of whom Louis P. Hansen was a familiar cigar maker. A grandnephew on the Swedish side is Stanley M. Truhlsen.

The first Swedes in Omaha came through Florence at the Winter Quarters of the Mormons. The group continued to come through, particularly with the construction of the Union Pacific railroad in the 1860s and the Union Pacific Railroad Omaha Shops Facility near downtown Omaha. In 1871, a committee of Swedes came from Illinois to determine whether the Nebraska prairie was suitable for Swedish settlement and farming. When they did, this committee effectively ushered in an entirely new influence in the growth of the state. This led to a variety of towns being settled, including Stromsburg, Oakland, Pender, Wakefield, and Wausa. Other significant Swedish populations in Nebraska included Mead, Malmo, and Swedeburg. It also led to the development of Omaha's substantial Swedish population.

Omaha boasted an area of the city with such a heavy concentration of Swedes that it was called "Little Stockholm". That early area was in the Near North Side neighborhood, bordered by 21st and 18th Streets, from Cass to Cumming Streets. Further north in the Kountze Place neighborhood was another area with "many Swedes, some of the 'better class'". Other professional people who were from Sweden lived in the Gifford Park neighborhood around 36th and Cass Streets. The impact of Swedes on the North Omaha community may be present in the Vikings mascot of Omaha North High School. Josie McCullough, who grew up in the Near North Side during the late 1800s, wrote, "In that neighborhood Swedish, Bohemian, Italian, Irish and Negro children all contributed to the process of Americanization." By 1930, Swedes made up more than 10 percent of Omaha's population.

All content from Kiddle encyclopedia articles (including the article images and facts) can be freely used under Attribution-ShareAlike license, unless stated otherwise. Cite this article:
Swedes in Omaha, Nebraska Facts for Kids. Kiddle Encyclopedia.