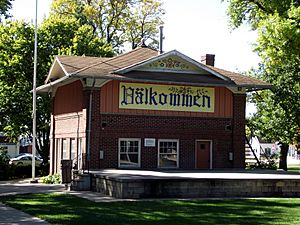 Stromsburg is a city in Polk County, Nebraska, United States. The population was 1,171 at the 2010 census.

Stromsburg was settled early in Nebraska history. A group of Swedish settlers coming from the town of Ockelbo arrived in the 1860s after several years in Illinois. This group had a leader named Lewis Headstrom, who was a real estate agent. Seeing some similarities to their old Swedish homeland the settlers formed what would be called Stromsburg, named after a section of Ockelbo, Sweden. By the 1880s two brickyards were in operation in the town. Many buildings from ‘native’ brick still stand, including the Viking Center, now a community center that was originally The Opera House; the Cornerstone Bank; two businesses on the east side of the square; and several homes. Brick streets still surround the city square in Stromsburg. A brick Carnegie library was built in Stromsburg in 1918. The downtown area of Stromsburg has a town square in its center. This square forms a park, with lawns and mature trees, where festivals and events are held. In the center of the square is a two story Swedish style building made of brick with decorative toll painting and the phrase "Välkommen" (Swedish for "Welcome").

Stromsburg was given the title of the “Swede Capital of Nebraska” by Governor Frank B. Morrison in 1966 at the Swedish Festival. The Swedish festival is held in June each year and showcases Stromburg's Swedish heritage.

Stromsburg Public School was established in 1887. It operated until 2002, when the Stromsburg district consolidated with Benedict, Nebraska to form Cross County Community School. 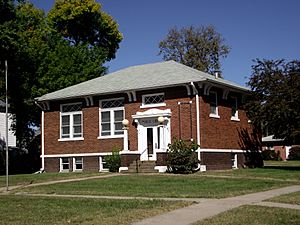 According to the United States Census Bureau, the city has a total area of 1.01 square miles (2.62 km2), all of it land.

Every summer, Stromsburg holds its weekend-long Swedish Festival, a celebration of the town's Swedish heritage. Traditional Swedish foods are prepared and sold in Grandma's Kitchen, and the Stromsburg Public Library hosts events that deal with genealogy or Swedish heritage. Craft shows and live Viking demonstrations are staged. 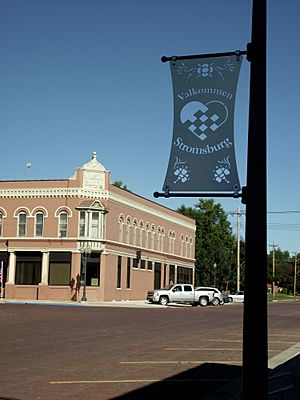 All content from Kiddle encyclopedia articles (including the article images and facts) can be freely used under Attribution-ShareAlike license, unless stated otherwise. Cite this article:
Stromsburg, Nebraska Facts for Kids. Kiddle Encyclopedia.