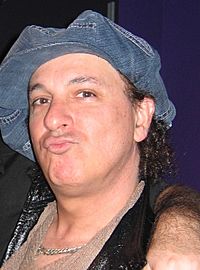 Sylvain Mizrahi (born February 14, 1951), better known as Sylvain Sylvain, is an American rock musician. He is most notable for being a member of the New York Dolls. He was a guitarist and pianist for the group. He was a member from 1971 to 1976. He has since had a solo career since the band's first split up. From 2004 to 2011, the New York Dolls surviving members regrouped.

Sylvain was born in Cairo, Egypt to a Jewish family. In the 1950s, his family fled Egypt to live in France, before moving to the U.S. state of New York. In April 2019, Sylvain made it known to the public that he had cancer.

All content from Kiddle encyclopedia articles (including the article images and facts) can be freely used under Attribution-ShareAlike license, unless stated otherwise. Cite this article:
Sylvain Sylvain Facts for Kids. Kiddle Encyclopedia.