System of units facts for kids 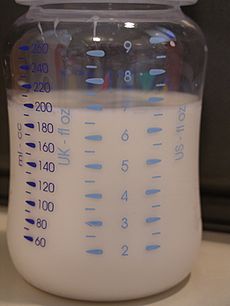 A baby bottle that measures in three measurement systems—imperial (UK), US customary, and metric.

A system of units is a collection of units of measurement. The quantities described by the units are related to each other by specific rules. These rules may not contradict each other. An example of a system like this is one needed for the problems of the economic system.

Base and derived units

Some of the units are called "base units". These units can be defined by arbitrarily. Other units are called derived units. They are defined using the base units. The most common systems of units today are the International System of Units (SI), the Imperial units and the United States customary units.

The base units of SI are the metre, the second, the kilogram, the ampere, the kelvin, the candela and the mole. SI has many derived units which include the watt, newton and joule. SI is called a "coherent system of units" because the constant factor in the definition of it derived units is always 1.

The base units of the imperial system and the United States customary system are the pound avoirdupois, the yard and the second. Derived units found in the Imperial and Customary systems of units include horsepower and Pounds per square inch.

The relationship force, energy and power is an example of coherence. The equations are

In SI, the equations become

SI is therefore a coherent system.

In the cgs system of units, the equations become

The equations for the cgs system do not have any additional constants. It is therefore a coherent system.

In the MKS-gravitational system, the equations become

All content from Kiddle encyclopedia articles (including the article images and facts) can be freely used under Attribution-ShareAlike license, unless stated otherwise. Cite this article:
System of units Facts for Kids. Kiddle Encyclopedia.