Taco trucks on every corner facts for kids 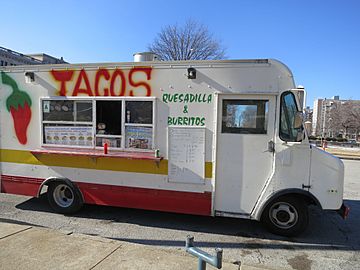 A taco truck in the downtown area of St. Louis, Missouri

The phrase "taco trucks on every corner" was used by the activist Marco Gutierrez, the co-founder of Latinos for Trump, on September 1, 2016, in comments that received widespread attention during the 2016 United States presidential elections.

During an interview with MSNBC, Gutierrez referred to his Mexican heritage, stating that "My culture is a very dominant culture, and it's imposing and it's causing problems. If you don't do something about it, you're going to have taco trucks on every corner." His remarks subsequently met with both sarcasm and criticism, many mocking the statement on social media and sending #TacosOnEveryCorner to the top of Twitter's list of trending topics. Others expressed concern over his remarks, stating that he was using "coded language that politicians and pundits use to get away with explicitly racist messages — from crime to immigration and terrorism." Taco trucks were used as voter registration-information booths in Houston Texas, and a nationwide Guac the Vote campaign was launched. National Public Radio (NPR) news wrote that taco trucks "now straddle the worlds of political symbol and internet meme".

The phrase originated with Marco Gutierrez, a co-founder of the group Latinos for Trump, during an interview with Joy Reid on MSNBC on September 1, 2016.

The phrase was used within the context of a warning about the "dominance" of Mexican culture, underscoring Gutierrez's stance that immigration should be more closely regulated.

In an interview with Deutsche Welle on September 8, 2016, Gutierrez explained, "If you don't regulate the immigration, if you don't structure our communities, we are going to do whatever we want. We are going to take over. That is what I'm trying to say and I think what is happening with my culture is that its imposing [itself] on the American culture – and both cultures are reacting."

In a survey of 1,898 American adults conducted on September 3, 2016, market research firm YouGov reported that 58% would be happy "if there was a taco truck on your corner".

All content from Kiddle encyclopedia articles (including the article images and facts) can be freely used under Attribution-ShareAlike license, unless stated otherwise. Cite this article:
Taco trucks on every corner Facts for Kids. Kiddle Encyclopedia.