Taddington Moor is a limestone hill between the villages of Taddington, Flagg and Chelmorton in the Derbyshire Peak District. The moor is an upland farming landscape. The summit at Sough Top is 438 metres (1,437 ft) above sea level. 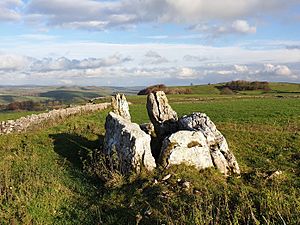 Five Wells is a Neolithic chambered tomb on Taddington Moor and it is a protected scheduled ancient monument. It was first excavated by the local archaeologist Thomas Bateman in 1846. He discovered the remains of at least twelve human skeletons in the stone-paved chambers. 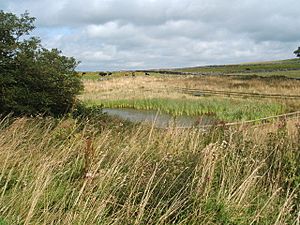 Taddington High Mere (on the edge of the moor south of Taddington village) is an ancient pond, formed during the Ice Age. It is a scarce water source on the White Peak limestone plateau. It was recorded in 1690 by John Orme as 'the great pond or meare called Taddington high Meare'. The ancient packhorse track Oriss Road passed the mere. In 2004 the mere was restored by volunteers from Taddington village with funding from the Countryside Agency.

All content from Kiddle encyclopedia articles (including the article images and facts) can be freely used under Attribution-ShareAlike license, unless stated otherwise. Cite this article:
Taddington Moor Facts for Kids. Kiddle Encyclopedia.