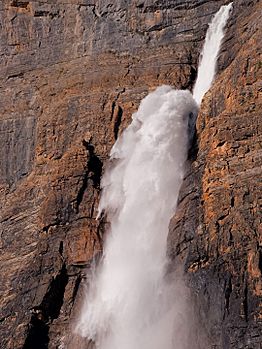 Takakkaw Falls ( also spelled Takkakaw) is a waterfall located in Yoho National Park, near Field, British Columbia in Canada. The falls have a total height of 373 metres (1,224 ft), making them the second tallest waterfall in Canada. The main drop of the waterfall has a height of 254 metres (833 ft).

"Takakkaw" translates to "wonderful" in Cree. The falls are fed by the meltwater of the Daly Glacier, which is part of the Waputik Icefield. The glacier keeps the volume of the falls up during the warm summer months, and they are a tourist attraction, particularly in late spring after the heavy snow melts, when the falls are at peak condition.

Various sources place the total vertical height of Takakkaw Falls between 302 m (991 ft) and 373 m (1,224 ft). The waterfall was formerly thought to be the tallest in Canada, but a new survey in 1985 found that it is actually shorter than Della Falls on Vancouver Island. The results of that survey also concluded that the main drop of the falls is 254 metres (833 ft) high.

All content from Kiddle encyclopedia articles (including the article images and facts) can be freely used under Attribution-ShareAlike license, unless stated otherwise. Cite this article:
Takakkaw Falls Facts for Kids. Kiddle Encyclopedia.