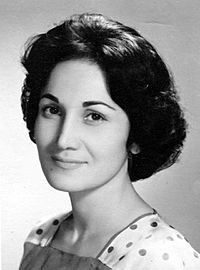 In 1967, she had also published a biography on Zandokht Shirazi, a pioneer in the feminist movement in Iran.

She also worked on the editorial board of the New Jersey-based magazine, Persian Heritage. She identified as Bahai. Bassari also assisted in books on the life of the influential Persian Bahai poet Táhirih.

All content from Kiddle encyclopedia articles (including the article images and facts) can be freely used under Attribution-ShareAlike license, unless stated otherwise. Cite this article:
Talat Basari Facts for Kids. Kiddle Encyclopedia.