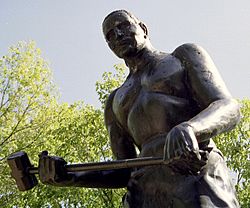 Statue of John Henry outside the town of Talcott in Summers County, WV

Talcott is named for Capt. Talcott, a civil engineer with the Chesapeake and Ohio Railway who was in charge of building the Big Bend Tunnel.

Talcott has gained some fame for being what many in the area consider to be the home of the John Henry legend. Henry was an African-American railroad worker in the 1800s who supposedly competed in a legendary race with a steam-powered drill bit, and won, dying in the process. Historian Louis Chappell traveled to Talcott in the 1920s and interviewed railroad workers who claimed to have worked with Henry when building the Great Bend tunnel on the C&O line through Talcott. The accounts of the surviving workers seemed to corroborate that Henry was, in fact, a real person, although the other aspects to the legend were impossible to confirm or deny based on the interviews conducted by Chappell

The Hilldale-Talcott Ruritan Club raised a statue of Henry atop Big Bend mountain in 1972 to commemorate the legend. Talcott now hosts an annual John Henry Days festival each July that features re-tellings of the famous legend, duck races, craft booths, and other festivities.

All content from Kiddle encyclopedia articles (including the article images and facts) can be freely used under Attribution-ShareAlike license, unless stated otherwise. Cite this article:
Talcott, West Virginia Facts for Kids. Kiddle Encyclopedia.