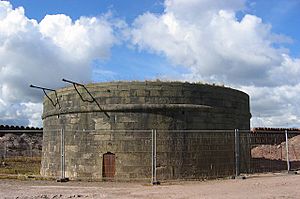 The Tally Toor in Leith, Edinburgh, Scotland, is one of the country's three martello towers, the other two being at Hackness and Crockness in Orkney. Originally built offshore on a rocky outcrop called the Mussel Cape Rocks, the land around it was subsequently reclaimed, and the building now lies, half-buried, in an industrial area on the eastern breakwater of Leith Docks. 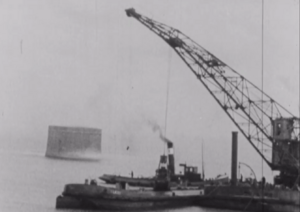 Built in 1809 and altered in 1850, the tower housed an anti-aircraft battery during World War II.

It is designated a Scheduled Ancient Monument by Historic Environment Scotland.

Irish folk symbols carved on the stonework indicate that it was built by Irish navvies.

All content from Kiddle encyclopedia articles (including the article images and facts) can be freely used under Attribution-ShareAlike license, unless stated otherwise. Cite this article:
Tally Toor Facts for Kids. Kiddle Encyclopedia.