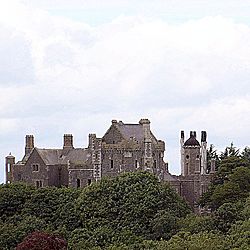 During the Plantation of Ulster the castle at Tandragee became the property of Sir Oliver St John, Lord Deputy of Ireland. He rebuilt the original stronghold of the O'Hanlon Clan. During the Irish Rebellion of 1641, however, the O'Hanlons attempted to regain their lands – the result was the castle being ruined; it remained so for two hundred years.

The castle and estate were sold by The 10th Duke of Manchester (who was born at Tandragee) in the 1950s, and it was purchased by Mr. Hutchinson, a businessman from Tandragee. Today the Castle houses offices for the Tayto potato crisp factory and the park's demesne incorporates a golf course.

All content from Kiddle encyclopedia articles (including the article images and facts) can be freely used under Attribution-ShareAlike license, unless stated otherwise. Cite this article:
Tandragee Castle Facts for Kids. Kiddle Encyclopedia.