Tandragee (from Irish: Tóin re Gaoith, meaning "backside to the wind") is a village in County Armagh, Northern Ireland. It is built on a hillside overlooking the Cusher River, in the civil parish of Ballymore and the historic barony of Orior Lower. It had a population of 3,486 people in the 2011 Census.

Overlooking the village is Tandragee Castle. Originally the seat of the O'Hanlon sept, the chiefs of Orior, it was taken over by the English during the Plantation of Ulster and rebuilt in about 1837 for The 6th Duke of Manchester. Today, its grounds are home to the Tayto potato-crisp factory.

Northern Ireland Electricity has an interconnector to County Louth in the Republic of Ireland from the outskirts of the town.

Earlier spellings of the name include Tanderagee and Tonregee. 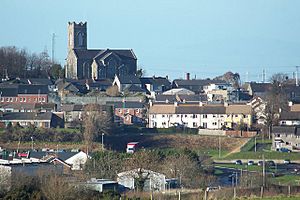 There is an airstrip for landing and taking off of small aircraft near the old porridge factory.

Tandragee is classified as an intermediate settlement by the NI Statistics and Research Agency (NISRA) (i.e. with population between 2,050 and 4,500 people). On Census day (29 April 2001) there were 3,050 people living in Tandragee. Of these:

There is a golf course within the grounds of Tandragee Castle, within walking distance of the main street. It is 5,589 metres, par 71, and a hilly parkland course.

Tandragee is also home to the Tandragee 100, a motorcycle road racing event held each year on country roads near the town.

Despite Tandragee's Protestant majority, the Gaelic Athletic Association also has a presence in the town. Tandragee's Gaelic football team is named "The Redmond O'Hanlons", after the 17th century rapparee of the same name.

All content from Kiddle encyclopedia articles (including the article images and facts) can be freely used under Attribution-ShareAlike license, unless stated otherwise. Cite this article:
Tandragee Facts for Kids. Kiddle Encyclopedia.