Craigavon (pronounced krayg-AV-ən) is a planned settlement in north County Armagh, Northern Ireland. Its construction began in 1965 and it was named after Northern Ireland's first Prime Minister: James Craig, 1st Viscount Craigavon. It was intended to be the heart of a new linear city incorporating Lurgan and Portadown, but this plan mostly failed and less than half of the proposed work was finished. Among locals today, "Craigavon" refers to the area between the two towns. It is built beside two artificial lakes and is made up of a large residential area (Brownlow), a second smaller one (Mandeville), plus a central area (Highfield) that includes a substantial shopping centre, a courthouse and the district council headquarters. The lakes, a wildlife haven, are surrounded by woodland with walking trails. There is also a watersports centre, petting zoo, golf course and ski slope in the area. In most of Craigavon, motor vehicles are completely separated from pedestrians, and roundabouts are used extensively. 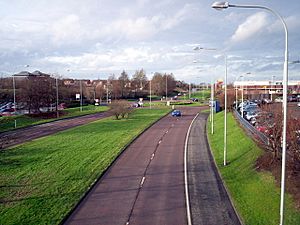 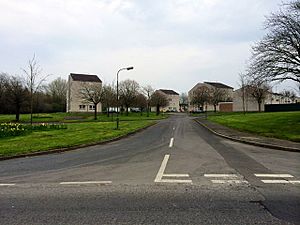 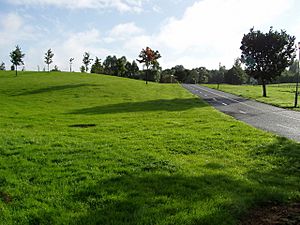 One of the many cycle paths in Craigavon

Craigavon was planned as a 'new city' for Northern Ireland that would mirror cities such as Milton Keynes in Great Britain. It was conceived as a linear city that would link the towns of Lurgan and Portadown to create a single urban area and identity. The argument for a new town was based on projections indicating population increases over the following decades that would require large-scale house building. Similar projects had been successfully completed in Great Britain so it was in some ways a symbol of Northern Ireland as both modern and a part of the British mainstream. The Craigavon Development Commission was appointed in October 1965 to develop the 'new city'. About 6,000 acres of land between Lurgan and Portadown was vested from farmers at £6 an acre. Several reasons have been suggested for the suitability of the site including the existing population centres, industrial base, nearness to Belfast and the belief that Craigavon would help spread development away from Belfast. It was hoped that residents of Belfast would be attracted by the suburban nature of Craigavon's design and that business would see it as an interesting alternative. Cash incentives were offered to some families moving to Craigavon. The M1 motorway was built to link the new city with Belfast and there were plans to replace the Lurgan and Portadown railway stations with a single high speed terminal in central Craigavon. The Craigavon Area Hospital was built to replace small hospitals in the two towns.

The design of Craigavon was based on Modernism and imbued with the spirit of the age. The planners separated motor vehicles from pedestrians and cyclists wherever possible, creating a network of paths allowing residents to travel across Craigavon without encountering traffic. The road network for motor vehicles used roundabouts instead of traffic lights at junctions, giving the planners the ability to easily increase the number of lanes if it became necessary. Electricity and other cables were placed underground and street lighting was standard throughout. The planners clustered the housing developments around small 'village centres' with associated retail space, leisure facilities, post offices, primary schools, pharmacies, community centres and other civic amenities. All estates were built with security in mind, with one vehicle entry/exit point. Single-use zoning was part of the design; there was a total separation of industrial land-use from all other uses.

Craigavon was designed to be a very child-friendly environment with small playgrounds dotted throughout the residential areas. There was an emphasis on providing green space in the housing estates and safe paths to cycle on. The new town was also provided with many civic amenities including a leisure centre, library, shopping centre, civic centre, a large park with artificial lakes, playing fields, a petting zoo, public gardens and an artificial ski slope.

Problems began to come to light when it emerged that some housing estates had been built with materials and techniques that had not been fully tested, with the result that insulation, sound-proofing and durability were lacking. This was compounded by the outbreak of 'the Troubles' in the late 1960s, which resulted in sectarian violence and segregation. Investment into Northern Ireland dried up and emigration rose. The Craigavon Development Commission was wound up in 1973 and Craigavon Borough Council created. The area's main employer, Goodyear, had a large fan-belt factory in the Silverwood industrial estate, and at the time it was Europe's largest factory. However, the plant failed to make money on a consistent basis, and had to shut in 1983. It also emerged that the population projections for Northern Ireland upon which the project was based were wildly inaccurate, with the result that the planned development was redundant.

Consequently about half of what was planned was never built, and of what was built, some of that had to be demolished after becoming empty and derelict. The area designated as Craigavon 'city centre', for much of this time contained only the municipal authority, the court buildings and a shopping mall, surrounded by greenfield land. Dr Stephen McKay, director of education at the School of Planning, Architecture & Civil Engineering at Queen's University Belfast, said that the plan to build Craigavon was "flawed from the outset", adding: "The cycle ways, mixed housing and recreational zones were really never going to work in light of the circumstances. The manifestation of Craigavon to many was effectively a series of roundabouts". Locally-born writer Newton Emerson said: "As a child, I didn't notice the failure of Craigavon. The new city was an enormous playground of hidden cycle paths, roads that ended suddenly in the middle of nowhere and futuristic buildings standing empty in an artificial landscape".

The identity of a new city never really caught on. The name 'Craigavon' is today used by locals to refer to the area between Lurgan and Portadown, but the names of the old towns stubbornly live on and so do their identities. Many citizens of Lurgan and Portadown resent being identified with the 'new city' of Craigavon.

However, after many years of development, and rising house prices closer to Belfast, Craigavon is now taking off. Many of the older housing estates have been demolished, improving the general tone of the area. The building of new estates have brought many new people into the area, and the growth of Craigavon Shopping Centre (now renamed Rushmere Shopping Centre) has made it a major shopping destination.

For more information, see The Troubles in Craigavon, which includes a list of incidents in Craigavon during the Troubles resulting in two or more fatalities. On 10 March 2009 the CIRA claimed responsibility for the fatal shooting of a PSNI officer in Craigavon — the first police fatality in Northern Ireland since 1998. 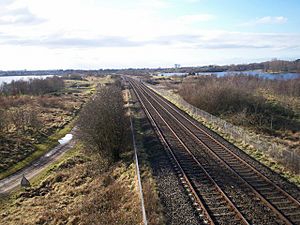 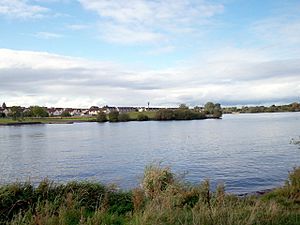 Craigavon lies on an area of flat land near the southeastern shore of Lough Neagh. The surrounding settlements (listed clockwise) are Aghacommon (north), Lurgan (northeast), Corcreeny (east), Bleary (southeast) and Portadown (southwest). It is separated from these surrounding settlements mostly by fields. The narrow gap between Craigavon and Portadown is marked by the fields/playing fields in Lisnisky and Kernan. The gap between Craigavon and Lurgan is narrower, being marked by fields/playing fields in Ballynamony, Tullygally, Taghnevan and Monbrief.

Much of Craigavon is within the civil parish of Seagoe. The following is a list of townlands within Craigavon's urban area (excluding Lurgan, Portadown and Bleary), along with their likely etymologies:

For census purposes, Craigavon is not treated as a separate entity by the NI Statistics and Research Agency (NISRA). Instead, it is combined with Portadown, Lurgan and Bleary to form the "Craigavon Urban Area". This makes it difficult to glean an accurate demographic picture of the area that is generally regarded as Craigavon – the mainly residential area between Portadown and Lurgan. This area roughly corresponds with the Drumgask, Drumgor, Kernan and (part of) Taghnevan electoral wards.

Craigavon has an 800-strong Chinese community and a high level of racially motivated incidents.

Craigavon has been a historically Protestant town; however, in recent times, the electorate has become gradually less so, with higher numbers of Catholics and people of other religions or people of no declared religion.

Craigavon is twinned with:

All content from Kiddle encyclopedia articles (including the article images and facts) can be freely used under Attribution-ShareAlike license, unless stated otherwise. Cite this article:
Craigavon Facts for Kids. Kiddle Encyclopedia.