"Tea Party" is a song by Estonian singer Kerli. It is featured on the album Almost Alice, a multi-artist compilation album which features music inspired by the 2010 film Alice in Wonderland released on March 2, 2010.

"Tea Party" was released as a single from the Almost Alice soundtrack through a maxi single featuring the song and six remixes that was released digitally on June 15, 2010.

The music video, which is directed by Justin Harder, premiered on March 10, 2010.

Kerli stated she wanted to create something "psychedelic [and] twisted" and inspired by the Alice in Wonderland film.

Kerli stated it was intended that the song would never see its proper release as a single as she feels her upcoming second studio album is better and she "didn't want the label to fully go with something like 'Tea Party' as a single and then not push all the other stuff if 'Tea Party' didn't do everything they needed it to." However, a remix single was given a digital release on June 15, 2010. 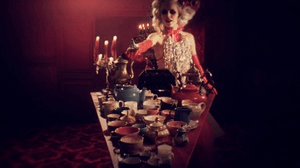 Kerli pours potion into the tea before it is served.

The music video is directed by Justin Harder and debuted on March 10, 2010. It features Kerli throwing a lavish tea party with her guests in abstract make-up and costumes. It is revealed towards the end Kerli added a potion to the tea which causes the guests to turn into dolls which she collects and places on a shelf.

On May 26, 2010, Kerli performed "Tea Party" at the opening night of the Fashion Institute of Design & Merchandising exhibit for Walt Disney Studios in Los Angeles, California.

All content from Kiddle encyclopedia articles (including the article images and facts) can be freely used under Attribution-ShareAlike license, unless stated otherwise. Cite this article:
Tea Party (song) Facts for Kids. Kiddle Encyclopedia.