Teguh Karya was born Steve Liem Tjoan Hok on 22 September 1937 in Pandeglang, Banten. He was the first child of Chinese Indonesians Laksana Karya (Tjon Hok) and Naomi Yahya ; there was some Bantenese descent from his grandmother. He attended elementary school in Pandeglang, but moved to Jakarta for junior high school, where he struggled with the exact sciences but did well in the creative arts and history.

Karya's most commercially successful work, Badai Pasti Berlalu (The Storm Will Surely Pass), was released in 1977. Based on a novel of the same name by Marga T, it was watched by 212,551 people in its original run. It later won four awards at the 1977 Indonesian Film Festival. 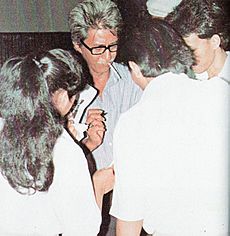 Karya signing an autograph at the 1982 Indonesian Film Festival.

In 1998, Karya suffered from a stroke, which caused some memory loss and put him in a wheelchair for the rest of his life. He died at the age of 64 at the Mintoharjo Navy Hospital in Central Jakarta on 11 December 2001.

In 2005, the Twilite Orchestra held a memorial concert featuring songs from Karya's films. Performers included people he had directed, such as Berlian Hutauruk, as well as pop stars like Krisdayanti and Ruth Sahanaya.

Karya never married, although he occasionally dated. When asked why, he said that there everyone had "rooms" in them, for art, friends, country, and other things; the order these rooms were filled was different for each person.

All content from Kiddle encyclopedia articles (including the article images and facts) can be freely used under Attribution-ShareAlike license, unless stated otherwise. Cite this article:
Teguh Karya Facts for Kids. Kiddle Encyclopedia.