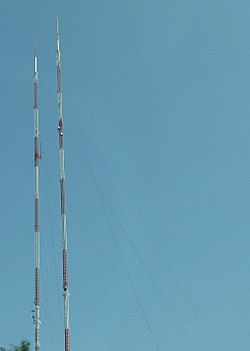 The towers, commonly called simply the Shoreview Towers by local residents, are owned by Telefarm, Inc., a joint venture of Twin Cities broadcasters CBS Television Stations (WCCO channel 4), Hubbard Broadcasting (KSTP channel 5, KSTC channel 5.2, KSTP-FM 94.5 FM, and KTMY 107.1 FM), and Tegna (KARE (channel 11) for the transmission of digital television and FM radio throughout the Greater Twin Cities. Along with Sinclair Broadcasting Group's WUCW (channel 23), Minnesota Public Radio flagship station KNOW-FM (91.1 MHz) are additional tenants on the tower. The towers were initially built in the 1970s for analog television, and were replacements for a single "candelabra" style tower which collapsed just prior to completion in 1971, killing six workers on the tower and one on the ground.

The towers were upgraded at the turn of the century to allow the addition of digital TV transmitters to meet Federal Communications Commission requirements. Because each antenna assembly weighs many tons, the towers had to be strengthened. Work took a bit longer than expected, and KSTP notably used its original broadcast tower along University Avenue in St. Paul, Minnesota for digital transmission for about a year starting in late 1999 before the construction was finished.

During the summer of 2019, an antenna section on the north tower was removed. Television station KSTC moved to RF channel 30, from its previous channel of 45. This was due to the spectrum reallocation of the late 2010s. This move was completed by early September.

All content from Kiddle encyclopedia articles (including the article images and facts) can be freely used under Attribution-ShareAlike license, unless stated otherwise. Cite this article:
Telefarm Towers Shoreview Facts for Kids. Kiddle Encyclopedia.