Shoreview is a city in Ramsey County, Minnesota, United States. The population was 25,043 at the 2010 census. In 2008, Shoreview ranked fourth in a Family Circle list of best family towns.

A second-ring suburb north of Saint Paul, Shoreview has nine city parks and three county parks. It has seven lakes, of which the largest are Turtle Lake, Snail Lake, Lake Owasso, and Island Lake, and Rice Creek flows through the northwest portion of the city.

Interstate 35W, Interstate 694, and County Highway 96 are three of its main routes.

There were 10,402 households, of which 28.5% had children under the age of 18 living with them, 56.5% were married couples living together, 7.9% had a female householder with no husband present, 2.8% had a male householder with no wife present, and 32.7% were non-families. 27.3% of all households were made up of individuals, and 9.7% had someone living alone who was 65 years of age or older. The average household size was 2.39 and the average family size was 2.92.

During the 1970s and the 1980s, Shoreview grew rapidly. Residential dwellings tripled after 1970. During the 1990s growth slowed as the city matured and less land was available for development. The focus of the city has shifted from new development to infill and redevelopment. Future projections indicate a stable population base.

In early 2000, the city adopted a new Comprehensive Guide Plan that serves as the framework for directing future land use and development decisions. The city also has an ongoing economic development program to retain and attract businesses that enhance the tax base and serve residents.

Shoreview's water system consists of six wells, two 1.5-million gallon elevated storage tanks, one 1-million gallon underground reservoir, and more than 100 miles of water main. The water system has a total pumping capacity of 14.4 million gallons per day, with an average daily demand of 3.2 million gallons and a peak demand of 10.6 million gallons per day. The city maintains 108 miles of city owned sewer laterals and 17 lift stations. Sewer trunk lines and treatment facilities are owned by the Metropolitan Council Wastewater Services MCWS). Xcel Energy provides electricity and natural gas service to city residents. Along with this, the city maintains 88 miles of residential and collector streets.

1837 - Dakota and Ojibwe Indians once inhabited the area that is now Shoreview. Indian mounds containing human bone fragments, arrowheads, pieces of pottery, and bits of charcoal have been found on Rice Creek near the north shore of Long Lake in nearby New Brighton and in parts of Shamrock Park. In 1837 the land lying between the St. Croix and Mississippi Rivers, including what is now Shoreview, was ceded to the United States Government by the Ojibwe.

1850 - In February 1850, Socrates A. Thompson, accompanied by an Indian friend, left Saint Paul in search of a good location for farming. Thompson was the first white person to settle on land that is now within the boundaries of the city of Shoreview. Soon people from Switzerland, England, Ireland, Germany, Vermont, Virginia, Illinois and New York began farming in Shoreview. A well traveled wagon trail passed though Shoreview, with the current location of Shamrock Park being a popular resting place for travelers.

1858 - At one time, Shoreview was part of the former Mounds View Township. The name came from a range of hills running through the center of the township. Mounds View Township was organized on May 11, 1858, the same day that Minnesota became a state.

1880 - Later in the 1800s railroad lines expanded to include Shoreview. The first railroad lines in Shoreview, owned by James "The Puck" McMillan and his Duluth, South Shore and Atlantic Railway (now Soo Lines) were built in the 1880s.

1957 - On March 14, 1957 a group of citizens, feeling the inadequacy of a township government, presented a petition to the Ramsey County Board of Commissioners that called for the incorporation of the Village of Shoreview. This action would separate Shoreview from Mounds View Township. After a bitter dispute, an election was held at the Shamrock Park pavilion and the incorporation of Shoreview was approved by a vote of 853 to 748.

April 23, 1957, Shoreview was officially incorporated. The first Mayor of Shoreview, Kenneth Hanold, was elected on May 23, 1957. At this time, Shoreview had a population of 5,231 and an assessed valuation of $1,884,000. (Shoreview now has 26,500 residents and $3.1 billion in total property value.) The first elected officers met in a small outbuilding on Willis Wilson’s property (County Road I). A few weeks later they moved into an office on the second floor of Mayor Hanold’s garage (Rice Street and Interstate 694).

When questions arose about renting property from a mayor, a search was conducted to look for another space. Between 1957 and 1973, Village Hall was housed first in a former barn (Highway 96) from which the second floor had been removed. The next Village Hall, also located on Highway 96, was a small house which had been repaired following an explosion. At this time, Shoreview’s governing was being done from a restored house and a converted barn near Shamrock Park.

1963 - December 10, 1963, Interstate Highway 694 was opened through Shoreview. The three broadcast towers, located on the north side of Highway 694, were constructed in the early 1970s and have become familiar landmarks in Shoreview and are the tallest structures in Minnesota.

Citizens worked to change the form of government, and on November 5, 1963, in order to better deal with the village’s growing population, the citizens of Shoreview voted to shift to a “Plan A” form of government under which the village clerk and treasurer were appointed rather than elected.

1973 - July 17, 1973 community leaders decided it was time to build a City Hall. A referendum was passed by a single vote and a structure was built. This was the site of Shoreview’s government until 1990 when the City Hall and Community Center opened at Shoreview Commons.

1974 - Shoreview changed forms of government once again and became a city on January 1, 1974 through an act of the State Legislature. With a population of over 14,000 at the time, the residents voted in November 1974 to adopt the present “Plan B” Council-Manager form of government.

2007 - Shoreview celebrated its golden anniversary with a ceremony at Shamrock Park recognizing residents living in the community since its incorporation.

2011 - Shoreview Maintenance Center renovated/received the LEED Gold Certification by the Green Building Council. This was the first in the nation to be certified under the 2009 LEED rating system and only the fifth city facility in the state to be LEED certified. Mayor Martin received the C.C.Ludwig Award for outstanding service and leadership from the League of Minnesota Cities.

Land O'Lakes has a corporate office in Shoreview. 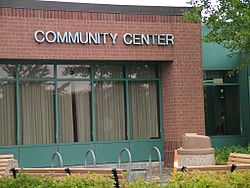 The following institutions are located in Shoreview:

St. Odilia's, a private Catholic school, located next to Island Lake school, has a total enrollment of approximately 550 students in grades K–8.

All content from Kiddle encyclopedia articles (including the article images and facts) can be freely used under Attribution-ShareAlike license, unless stated otherwise. Cite this article:
Shoreview, Minnesota Facts for Kids. Kiddle Encyclopedia.