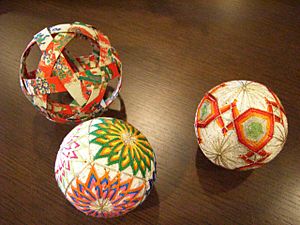 Temari (手まり) balls are a folk art form and Japanese craft, originating in China and introduced to Japan around the 7th century A.D. "Temari" means "hand ball" in Japanese. Balls made from embroidery may be used in handball games and other such similar games (e.g., hacky sack). An accessory similar in appearance (and constructed with similar techniques and materials), but with the addition of a hand-strap (made with either satin cord or ribbon) and a tassel, can serve as an accessory for a kimono; a kimono bag. 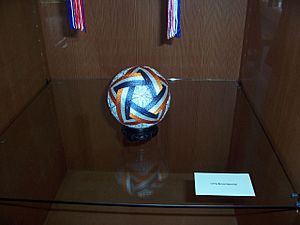 Temari are highly valued and cherished gifts, symbolizing deep friendship and loyalty. Also, the brilliant colors and threads used are symbolic of wishing the recipient a brilliant and happy life. Traditionally, becoming a craftsman in Japan was a tedious process. Becoming a temari artist in Japan today requires specific training, and one must be tested on one's skills and technique before being acknowledged as a crafter of temari.

Traditionally, temari were often given to children from their parents on New Year's Day. Inside the tightly wrapped layers of each ball, the mother would have placed a small piece of paper with a goodwill wish for her child. The child would never be told what wish their mother had made while making the ball.

Alternately, some balls contained "noisemakers" consisting of rice grains or bells to add to the play value. It is said that traditional temari were wrapped so tightly they would bounce.

Temari are also known as "gotenmari."

All content from Kiddle encyclopedia articles (including the article images and facts) can be freely used under Attribution-ShareAlike license, unless stated otherwise. Cite this article:
Temari (toy) Facts for Kids. Kiddle Encyclopedia.