Kids Encyclopedia Facts
For balls referred to as 'bouncy balls', see bouncy ball. For the device used in video recording to indicate the rhythm of a song, see bouncing ball (music). For the computer virus, see Bouncing Ball (virus). 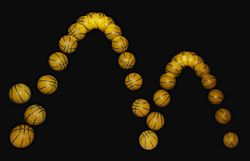 A bouncing ball. The motion is not quite parabolic due to air resistance.

The physics of a bouncing ball concerns the physical behaviour of bouncing balls, particularly its motion before, during, and after impact against the surface of another body. Several aspects of a bouncing ball's behaviour serve as an introduction to mechanics in high school or undergraduate level physics courses. However, the exact modelling of the behaviour is complex and of interest in sports engineering.

The motion of a ball is generally described by projectile motion (which can be affected by gravity, drag, the Magnus effect, and buoyancy), while its impact is usually characterized through the coefficient of restitution (which can be affected by the nature of the ball, the nature of the impacting surface, the impact velocity, rotation, and local conditions such as temperature and pressure). To ensure fair play, many sports governing bodies set limits on the bounciness of their ball and forbid tampering with the ball's aerodynamic properties. The bounciness of balls has been a feature of sports as ancient as the Mesoamerican ballgame.

Forces during flight and effect on motion 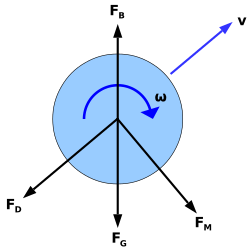 The forces acting on a spinning ball during its flight are the gravitational force (FG), the drag force (FD), the Magnus force (FM), and the buoyant force (FB).

The motion of a bouncing ball obeys projectile motion. Many forces act on a real ball, namely the gravitational force (FG), the drag force due to air resistance (FD), the Magnus force due to the ball's spin (FM), and the buoyant force (FB). In general, one has to use Newton's second law taking all forces into account to analyze the ball's motion:

where m is the ball's mass. Here, a, v, r represent the ball's acceleration, velocity, and position over time t.

The gravitational force is directed downwards and is equal to

where m is the mass of the ball, and g is the gravitational acceleration, which on Earth varies between 7000976399999999999♠9.764 m/s2 and 7000983400000000000♠9.834 m/s2. Because the other forces are usually small, the motion is often idealized as being only under the influence of gravity. If only the force of gravity acts on the ball, the mechanical energy will be conserved during its flight. In this idealized case, the equations of motion are given by

More specifically, if the ball is bounced at an angle θ with the ground, the motion in the x- and y-axes (representing horizontal and vertical motion, respectively) is described by 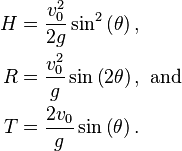 Further refinements to the motion of the ball can be made by taking into account air resistance (and related effects such as drag and wind), the Magnus effect, and buoyancy. Because lighter balls accelerate more readily, their motion tends to be affected more by such forces.

Air flow around the ball can be either laminar or turbulent depending on the Reynolds number (Re), defined as:

If the Reynolds number is very low (Re < 1), the drag force on the ball is described by Stokes' law:

where r is the radius of the ball. This force acts in opposition to the ball's direction (in the direction of

where Cd is the drag coefficient, and A the cross-sectional area of the ball.

Drag will cause the ball to lose mechanical energy during its flight, and will reduce its range and height, while crosswinds will deflect it from its original path. Both effects have to be taken into account by players in sports such as golf.

The Magnus force acting on a ball with backspin. The curly flow lines represent a turbulent wake. The airflow has been deflected in the direction of spin.

In table tennis, a skilled player can exploit the ball's spin to affect the trajectory of the ball during its flight and its reaction upon impact with a surface. With topspin, the ball reaches maximum height further into its flight (1) and then curves abruptly downwards (2). The impact propels the ball forward (3) and will tend to bounce upwards when impacting the opposing player's paddle. The situation is opposite in the case of backspin.

The spin of the ball will affect its trajectory through the Magnus effect. According to the Kutta–Joukowski theorem, for a spinning sphere with an inviscid flow of air, the Magnus force is equal to

). The force is directed upwards for backspin and downwards for topspin. In reality, flow is never inviscid, and the Magnus lift is better described by

In sports like tennis or volleyball, the player can use the Magnus effect to control the ball's trajectory (e.g. via topspin or backspin) during flight. In golf, the effect is responsible for slicing and hooking which are usually a detriment to the golfer, but also helps with increasing the range of a drive and other shots. In baseball, pitchers use the effect to create curveballs and other special pitches.

Ball tampering is often illegal, and is often at the centre of cricket controversies such as the one between England and Pakistan in August 2006. In baseball, the term 'spitball' refers to the illegal coating of the ball with spit or other substances to alter the aerodynamics of the ball.

Any object immersed in a fluid such as water or air will experience an upwards buoyancy. According to Archimedes' principle, this buoyant force is equal to the weight of the fluid displaced by the object. In the case of a sphere, this force is equal to

The buoyant force is usually small compared to the drag and Magnus forces and can often be neglected. However, in the case of a basketball, the buoyant force can amount to about 1.5% of the ball's weight. Since buoyancy is directed upwards, it will act to increase the range and height of the ball.

The compression (A→B) and decompression (B→C) of a ball impacting against a surface. The force of impact is usually proportional to the compression distance, at least for small compressions, and can be modelled as a spring force.

When a ball impacts a surface, the surface recoils and vibrates, as does the ball, creating both sound and heat, and the ball loses kinetic energy. Additionally, the impact can impart some rotation to the ball, transferring some of its translational kinetic energy into rotational kinetic energy. This energy loss is usually characterized (indirectly) through the coefficient of restitution (or COR, denoted e):

For a ball dropped against a floor, the COR will therefore vary between 0 (no bounce, total loss of energy) and 1 (perfectly bouncy, no energy loss). A COR value below 0 or above 1 is theoretically possible, but would indicate that the ball went through the surface (e < 0), or that the surface was not "relaxed" when the ball impacted it (e > 1), like in the case of a ball landing on spring-loaded platform.

To analyze the vertical and horizontal components of the motion, the COR is sometimes split up into a normal COR (ey), and tangential COR (ex), defined as

For a straight drop on the ground with no rotation, with only the force of gravity acting on the ball, the COR can be related to several other quantities by:

Here, K and U denote the kinetic and potential energy of the ball, H is the maximum height of the ball, and T is the time of flight of the ball. The 'i' and 'f' subscript refer to the initial (before impact) and final (after impact) states of the ball. Likewise, the energy loss at impact can be related to the COR by

The COR of a ball can be affected by several things, mainly

External conditions such as temperature can change the properties of the impacting surface or of the ball, making them either more flexible or more rigid. This will, in turn, affect the COR. In general, the ball will deform more at higher impact velocities and will accordingly lose more of its energy, decreasing its COR.

Spin and angle of impact

If the surface is inclined by some amount θ, the entire diagram would be rotated by θ, but the force of gravity would remain pointing downwards (forming an angle θ with the surface). Gravity would then have a component parallel to the surface, which would contribute to friction, and thus contribute to rotation.

In racquet sports such as table tennis or racquetball, skilled players will use spin (including sidespin) to suddenly alter the ball's direction when it impacts surface, such as the ground or their opponent's racquet. Similarly, in cricket, there are various methods of spin bowling that can make the ball deviate significantly off the pitch.

The bounce of an oval-shaped ball (such as those used in gridiron football or rugby football) is in general much less predictable than the bounce of a spherical ball. Depending on the ball's alignment at impact, the normal force can act ahead or behind the centre of mass of the ball, and friction from the ground will depend on the alignment of the ball, as well as its rotation, spin, and impact velocity. Where the forces act with respect to the centre of mass of the ball changes as the ball rolls on the ground, and all forces can exert a torque on the ball, including the normal force and the force of gravity. This can cause the ball to bounce forward, bounce back, or sideways. Because it is possible to transfer some rotational kinetic energy into translational kinetic energy, it is even possible for the COR to be greater than 1, or for the forward velocity of the ball to increase upon impact.

A popular demonstration involves the bounce of multiple stacked balls. If a tennis ball is stacked on top of a basketball, and the two of them are dropped at the same time, the tennis ball will bounce much higher than it would have if dropped on its own, even exceeding its original release height. The result is surprising as it apparently violates conservation of energy. However, upon closer inspection, the basketball does not bounce as high as it would have if the tennis ball had not been on top of it, and transferred some of its energy into the tennis ball, propelling it to a greater height.

While the assumptions of separate impacts is not actually valid (the balls remain in close contact with each other during most of the impact), this model will nonetheless reproduce experimental results with good agreement, and is often used to understand more complex phenomena such as the core collapse of supernovae, or gravitational slingshot manoeuvres.

Several sports governing bodies regulate the bounciness of a ball through various ways, some direct, some indirect.

The pressure of an American football was at the center of the deflategate controversy. Some sports do not regulate the bouncing properties of balls directly, but instead specify a construction method. In baseball, the introduction of a cork-based ball helped to end the dead-ball era and trigger the live-ball era.

All content from Kiddle encyclopedia articles (including the article images and facts) can be freely used under Attribution-ShareAlike license, unless stated otherwise. Cite this article:
Bouncing ball Facts for Kids. Kiddle Encyclopedia.