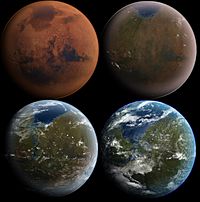 Artist's drawing of a terraformed Mars in four stages of development

Terraforming is changing a planet that we cannot live on at present. The idea is to change it so some life from Earth could exist there. It would need a suitable atmosphere (air), heat, and water.

Some think it is possible to terraform Mars, our Moon, Titan, Callisto and Mercury.

It is arguable that we have already succeeded in terraforming right here on Earth. Thanks to modern technology, humans can now thrive in places that should be impossible to live in such as deserts and the Arctic.

All content from Kiddle encyclopedia articles (including the article images and facts) can be freely used under Attribution-ShareAlike license, unless stated otherwise. Cite this article:
Terraforming Facts for Kids. Kiddle Encyclopedia.