Terry (November 17, 1933 – September 1, 1945) was a female Cairn Terrier performer who appeared in many different movies, most famously as Toto in the film The Wizard of Oz (1939). It was her only credited role, though she was credited not as Terry but as Toto. She was owned and trained by Carl Spitz. 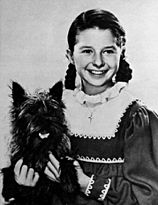 Terry as Rex with Virginia Weidler in Bad Little Angel (1939)

Terry, born in the midst of the Great Depression, was trained and owned by Carl Spitz. She was the mother of Rommy, another movie Cairn terrier, who appeared in other films including Reap the Wild Wind (1942) and Air Force (1943). Her first film appearance was in Ready for Love (1934) which was released on November 30, 1934, roughly one month before her first major film appearance, with Shirley Temple, in Bright Eyes (1934) as Rags.

She did her own stunts, and almost lost her life during the filming of The Wizard of Oz (1939), when one of the Winkie guards accidentally stepped on her foot, breaking it. She spent two weeks recuperating at Judy Garland's residence, and Garland developed a close attachment to her. Garland wanted to adopt her, but Spitz refused. Her salary, $125 per week (equivalent to $1,900 in 2018), was more than that of many human actors in the film, and also more than most working Americans at the time. She attended the premiere of The Wizard of Oz at Grauman's Chinese Theater; because of the popularity of the film, her name was changed to Toto in 1942.

She had 16 total film appearances, three of which were playing in theaters at the same time in the fall of 1939: The Wizard of Oz, The Women, and Bad Little Angel. Among the last ones was Tortilla Flat (1942), in which she was reunited with Oz director Victor Fleming and Frank Morgan, who played the Wizard. Terry's final film role was in Easy to Look At, released three weeks before her death. Her penultimate film, Adventures of Rusty, was released posthumously just five days after her death. She was uncredited in both films. 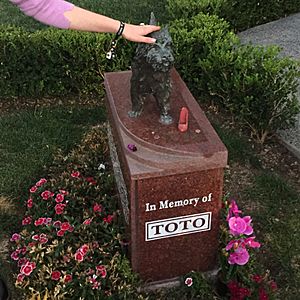 Terry died at age 11 in Hollywood on September 1, 1945, and was buried at Spitz's ranch in Studio City, Los Angeles. The grave was destroyed during the construction of the Ventura Freeway in 1958.

On June 18, 2011, a permanent memorial for Terry was dedicated at the Hollywood Forever Cemetery in Los Angeles.

All content from Kiddle encyclopedia articles (including the article images and facts) can be freely used under Attribution-ShareAlike license, unless stated otherwise. Cite this article:
Terry (dog) Facts for Kids. Kiddle Encyclopedia.