The Battle of the Birds facts for kids 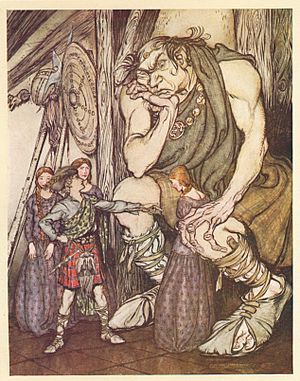 Illustration by Arthur Rackham, from The Allies Fairy Book from 1916. The king's son asks the giant for his youngest daughter's hand in marriage.

The Battle of the Birds is a Scottish fairy tale collected by John Francis Campbell in his Popular Tales of the West Highlands. He recorded it from a fisherman near Inverary, John Mackenzie. Joseph Jacobs took it from there for his Celtic Fairy Tales and added some additional elements.

It is also included in The Lilac Fairy Book by Andrew Lang and A Book of British Fairy Tales by Alan Garner.

A king's son set out to see a battle, where every animal fought; he promised to bring back to his father the news of who would be the king of the animals that year. He arrived when the fight was almost over, but a snake and a raven still fought. He cut off the head of the snake. The raven, in gratitude, flew him to a castle where his sister lived, and the prince spent the night there. The raven then flew to another castle, where he also spent the night, but the next morning he met a handsome youth, who had been the enchanted raven. The youth gave him a bundle and warned him not to open it until he was in the place where he most wanted to be.

When he was nearing his father's house, he opened the bundle. A great castle sprang up, and an irate giant demanded to know why he had put it there. It offered to put it back if the prince gave him his first son, when he reached seven years of age. Then the prince went out, and opened the bundle near his father's lands. He went into the castle, and found a pretty maid who was willing to be his wife. They had a son, and seven years later, they tried to put off the giant with the cook's son, and the butcher's son, but finally had to yield their own.

The giant raised him. One day, he heard music and found the giant's daughter. She told him the next day the giant would ask him to marry one of her two older sisters, but she wanted him to insist on her, because she did not like the bridegroom he wanted for her.

The prince asked, but the annoyed giant demanded that he clean out the byre, or he would not get his youngest but be killed. He started to clean. The daughter came by at noon, and the prince fell asleep, but the byre was clean when he woke. The giant knew he did not clean it, but set him to thatch it with birds' down. The prince tried to hunt the birds. At noon, the daughter put him to sleep again, and the roofs were thatched with feathers when he woke. The giant knew he had not done it, and set him to fetch down a bird's nest. He tried to climb it and got no more than half way. The daughter built him a ladder of her fingers, and when he got it down, she left her little finger in the tree.

She told him that the giant would ask him to pick her out from her sisters, and the only mark would be that she was missing her finger. The wedding was held and celebrated, and the prince picked out his bride from her sisters. The giant told them to go to rest. The daughter told her husband that they had to flee at once, and they took a gray filly. She left behind slices of apples that answered the giant. Only when the last one had spoken did he realize that they had fled. He gave chase. When the giant nearly caught them, the daughter had the prince take a twig from the filly's ear and throw it behind them: it became a forest. The giant got through it, and they threw a pebble that became a mountain. The giant got through it, and they threw a flask of water that became a wave and drowned him.

The daughter forbade him to let anyone or thing in his father's house kiss him, or he would forget her, but a greyhound leaped up to kiss him, and he forgot the daughter. She stayed in a tree by a well. A shoemaker's wife and daughter, going to fetch water, both thought her shadow was theirs, and thought themselves too beautiful to fetch water. The shoemaker went himself, saw her, and persuaded her to come down.

When she stayed his house, some young men tried to woo her, but she made them stick to the latch so they could not approach her. The shoemaker was making shoes for the king's son, who was to marry, and the daughter persuaded him to take her. She conjured up a silver and a gold pigeon, and grains. The silver pigeon ate them, and the golden pigeon taxed him with what the giant's daughter had done for the prince. At that the prince knew her, and married her a second time.

Irish folklorist Patrick Kennedy listed Irish tale The Giant and his Royal Servants as a parallel tale to the general narrative of The Battle of the Birds and cited The Master Maid as its Norse counterpart.

Joseph Jacobs, in his commentaries on the tale, mentioned that "no less than sixteen variants [have been found] among the Celts", apart from published tales from Scotland and Ireland.

Slavicist Karel Horálek stated that Finnish variants followed the Russian story type very closely: the rescue of an eagle (or a raven, in some variants), the aerial journey, the box, the opening, the creature who offers to close it.

Another variant is Estonian tale Rüütli poeg ("A Knight's Son"), collected by Estonian author Juhan Kunder. In the first part of the tale, a mouse and a sparrow begin to live together until they have a fall out. Soon, the petit animals ask the help of larger creatures: the mouse recruits an old bear from the forest while the sparrow seeks the help of the "teevits" bird. The bear and the teevits fight, the bird losing and being found by a knight in the woods. The knight helps the bird regain its health and later it gives him a box, telling him not to open it. After the "teevits" departs, the knight opens the box and a magical golden city springs from it. Not knowing how to close the box, the knight pleads for help, until an old gray man promises to close the box, in exchange for the knight's son, unborn at the time.

Professor Jack V. Haney stated that the combination of AT 222* and AT 313 was more common in the East Slavic area (Russia, Ukraine and Belarus).

Nisbet Bain translated a Cossack (Ukrainian) variant titled The Magic Egg: a lark and a shrew-mouse quarrel over the crop yields and then go to war against each other. Meanwhile, an archer has an eagle in his sights and prepares to shoot an arrow, but the bird pleads for its life. The archer takes the eagle with him and helps it recover. The eagle then flies with him; it first drops him three times in mid-air to scare him, but later takes him to its master. The archer receives a magic egg and returns home. The man breaks opens the magic egg and an enchanted ox jumps out. The archer tries foolishly to put the animal back into the egg until an old she-dragon does so, in exchange for the archer's only son.

British scholar William Ralston Shedden-Ralston noted that this tale showed "a very striking ... likeness" to a Russian tale he collected: The Water King and Vasilissa the Wise. The tale features legendary Russian character "The Sea King", or "Morskoi Tsar" (fr). In it, a human king helps an injured eagle that, in return, takes the king on a journey and gives him two magical caskets. The human king opens the caskets and cannot close them, until the Sea Tsar offer his help.

Eight variants of the tale were collected by Russian folklorist Alexander Afanasyev in the 19th century, numbered 219-226. Out of these variants, tales number 219-221 and 224 begin with the hero's father (soldier, hunter, archer) meeting the eagle, flying on its wings and receiving a magical casket that he cannot close. Very soon, the antagonist of the tale appears to help the man close the box in exchange for his son.

This story structure has also expanded to the oral repertoire of the Mari people, either from the Russians or from the Finnish, Karel Horálek supposed.

A variant of the tale was collected from the Evenk people, with the name The Grateful Eagle. It begins with a battle between an eagle and a lion. The lion is the victor and the eagle, badly beaten, takes refuge with an old couple who live in the woods. When the eagle regains its health, it takes the old man for a journey around the world and presents him with a casket. After they say their goodbyes, the man opens the casket but forgets how to close it, until a mysterious man promises to close it in exchange for something the man owns in his house (his newly born son, unbeknownst to the man). The rest of the tale follows the ATU type 313, "The Magical Flight", with a swan maiden character.

All content from Kiddle encyclopedia articles (including the article images and facts) can be freely used under Attribution-ShareAlike license, unless stated otherwise. Cite this article:
The Battle of the Birds Facts for Kids. Kiddle Encyclopedia.