The Concert for Valor facts for kids 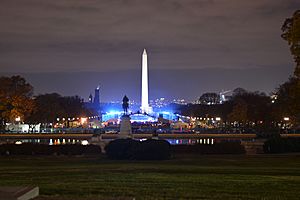 Concert for Valor on the National Mall, November 11, 2014

The Concert for Valor was a Veterans Day concert that took place on November 11, 2014, on the National Mall in Washington, D.C. The concert was put together by HBO, Chase, and Starbucks.

The Washington Metropolitan Area Transit Authority expected as many as 800,000 attendees to the 2014 event. This estimate was based on a permit filed with the United States Park Police. In actuality, newspapers reported that about 100,000 people attended. A couple of the performances drew questions as to their propriety for the event: one for "Fortunate Son" on its lyrics and one for Eminem on his profanity-laced tribute to Veterans Day. 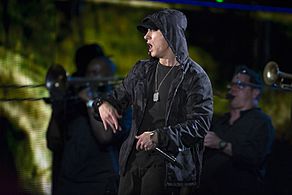 Eminem performing at The Concert for Valor

All content from Kiddle encyclopedia articles (including the article images and facts) can be freely used under Attribution-ShareAlike license, unless stated otherwise. Cite this article:
The Concert for Valor Facts for Kids. Kiddle Encyclopedia.