The English Art of Cookery facts for kids 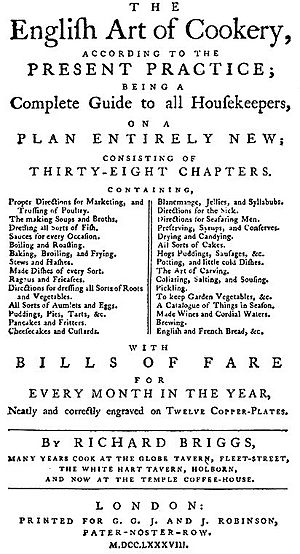 Title page of The English Art of Cookery. First edition, 1788

The English Art of Cookery is a cookery book of English cuisine by the tavern cook Richard Briggs, first published in 1788.

It includes recipes for toad in a hole, mushroom ketchup and puff pastry, and examples of Anglo-Indian influence.

The title page describes Richard Briggs as being "many Years Cook at the Globe Tavern, Fleet-street, the White-Hart Tavern, Holborn, [and] now at the Temple Coffee-house."

Briggs gave the book the title The English Art of Cookery according to the present practice; being a complete guide to all housekeepers on a plan entirely new. In his preface, dated Oct. 1, 1788, he explains that his intended audience is (commanded) servants rather than aristocrats: "I presume to offer the following Sheets to the Public, in hopes that they will find the Directions and Receipts more intelligible than in most Books of the Kind. I have bestowed every Pains to render them easily practicable, and adapted to the Capacities of those who may be ordered to use them." The historian Gilly Lehmann comments that in this preface, Briggs was stressing "his simple style in terms reminiscent of Hannah Glasse". The book was expensive, its price of 7 shillings placing it at "the upper end of the market."

The book contains a high proportion of French recipes for its period, Elizabeth Raffald's The Experienced English Housekeeper in comparison having far fewer. French or partly French titles include "Poulet a la Braize", "Soup a la Reine" and "Rump of Beef a la Doube". Despite these elegant foreign dishes, Briggs felt able to include homely English foods such as toad in a hole, though it did include "beaten ginger, and a little grated nutmeg", and used a "veiney piece of beef" rather than sausages.

The book contains several examples of Anglo-Indian influence. In the Pickling chapter, there are "Mock Ginger", "Melon Mangoes", and "Elder Shoots in Imitation of Bamboo". Briggs gives recipes for curries of veal and of chicken, calling for the use of "curric powder". 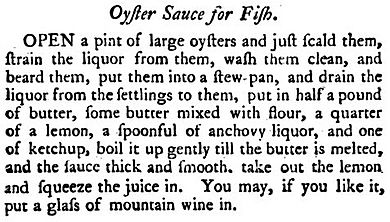 Recipe for "Oyster Sauce for Fish"

The book is strictly organised into 38 chapters with clearly distinct themes. Many of the chapters have an introductory paragraph stating "Proper rules to be observed in" its theme.

The recipes are given as names of dishes, such as "Oyster Sauce for Fish", with a paragraph of instructions. There are no lists of ingredients. Quantities are given where needed, in whatever measure is convenient, as "a pint of large oysters", "half a pound of butter", "a quarter of a lemon", or "a spoonful of anchovy liquor". Cooking instructions rely on the observation of the cook, as "boil it up gently till the butter is melted, and the sauce thick and smooth". 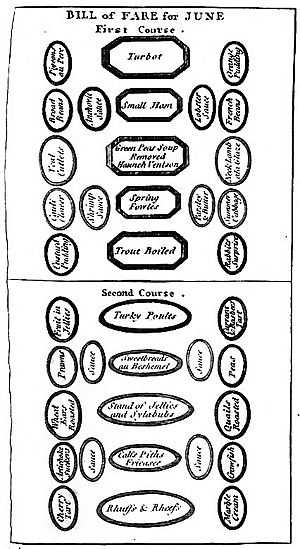 "Bill of Fare for June", including turbot, venison, sweetbreads au bechamel, jellies and syllabubs, and ruffs and reeves

The book was illustrated with 12 copper-plate engravings of Bills of Fare for the 12 months of the year, each one being a table layout of oval or octagonal dishes. These plates preceded the first chapter.

Many species of bird were eaten in eighteenth century England; Briggs describes how to roast "Ruffs and Reeves" from Lincolnshire and the Isle of Ely; Ortolan buntings; larks; plovers; wheatears from the South Downs, as well as wild ducks, woodcocks and snipes.

The book contains recipes for ketchups made with mushrooms or walnuts. It also describes how to make puff pastry, which Briggs used in both savoury and sweet dishes.

The book appeared in the following editions.

All content from Kiddle encyclopedia articles (including the article images and facts) can be freely used under Attribution-ShareAlike license, unless stated otherwise. Cite this article:
The English Art of Cookery Facts for Kids. Kiddle Encyclopedia.