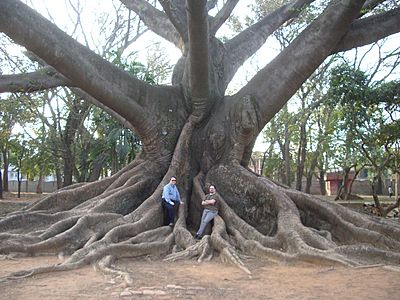 Base of a colossal specimen of the kapok tree Ceiba pentandra, with two individuals seated on its buttress roots to indicate scale

The Great Kapok Tree is an American children's picture book about rainforest conservation. It was written and illustrated by Lynne Cherry and was originally published by Harcourt Brace Jovanovich in 1990. The book is dedicated to Chico Mendes, a Brazilian environmental activist who was murdered in 1988.

Two woodcutters go to the Amazon rainforest. They stop beside a fine Ceiba tree and the larger man points to the tree and leaves. Lulled by "the heat and hum of the forest" the other woodcutter falls asleep beneath the Great Kapok Tree. While he sleeps, the many species of animals that live in the tree (including frogs, snakes, sloths, birds, anteaters and monkeys) come down to speak to him. They explain not only their dependence on the tree, but also the importance of the tree to the world. The man wakes up and sees the beauty of the rainforest. He picks up his ax and the word of the rainforest creatures echo through his mind. He has a moral dilemma. There is the tension in the story as he decides what to do. Will he follow the big man's orders or follow his own conscience? He considers what the animals have told him, and decides to leave the tree standing, dropping his ax and departing from the rainforest a changed man. (The young readers of the book let out sighs of relief!)

In 1989, Lynne Cherry learned about the plight of the Amazon rainforest and thought that maybe young people could help to save it. She was attending graduate school at Yale University at the time and she wrote The Great Kapok Tree while on a train ride between New Haven and DC. Soon thereafter, Dr. Tom Lovejoy, then at World Wildlife Fund, gave Cherry an artist in residency at WWF and he and the other scientists there provided her with their rain forest photographs to use as reference.World Wildlife Fund Cherry also immersed herself in the "tropical forest" in the NY Botanical garden New York Botanical Garden. Dr. Lovejoy and other WWF biologists, and Dr. Brian Boom, the director of the NY Botanical Garden, facilitated her travel to Manaus Brazil to experience the rainforest firsthand. She explored the vast forest around Lovejoy's research site, part of his famous "forest fragments" project, and sketched and photographed the plants and animals there.

When the book was released in 1990, coinciding with the twentieth anniversary of Earth Day, Cherry told a reporter, "When kids grow up, in another 20 years, they'll be the people making the decisions. If they're raised with these ideas ingrained in them, it will affect national policy. We will have raised a whole generation of environmentalists." 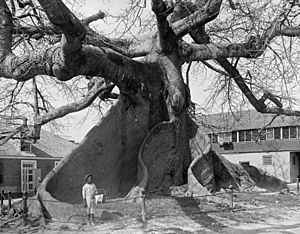 Child beside base of another huge kapok tree, growing in the Bahamas

Cherry's choice specifically of a Kapok tree (genus Ceiba) as a symbol to represent the need for forest conservation worldwide is particularly appropriate. Kapok trees, with their imposing height and girth (some species can grow to over 73 m (240 ft) in height and up to 5.8 m (19 ft) in diameter), feature largely in Native American mythologies (particularly that of the Maya) as embodiments of the Axis mundi, sustaining the entire cosmos by linking heaven, earth and the underworld (compare the mythical ash tree Yggdrasil). The compassionate woodman who decides to spare a single tree can thus be understood as standing for a decision by the human race to refrain from destroying the natural world in order to preserve it for future generations.

All content from Kiddle encyclopedia articles (including the article images and facts) can be freely used under Attribution-ShareAlike license, unless stated otherwise. Cite this article:
The Great Kapok Tree Facts for Kids. Kiddle Encyclopedia.