The Gremlins facts for kids 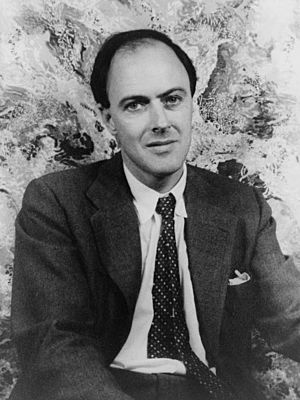 The Gremlins is a book written by Roald Dahl and published in 1943.

It was Dahl's first book and was written for Walt Disney Productions, in anticipation of a feature-length animated film that was never made. With Dahl's assistance, a series of gremlin characters were developed, and while pre-production had begun, the film project was eventually abandoned, in part because the studio could not establish the precise rights of the "gremlin" story, and in part because the British Air Ministry was heavily involved in the production because Dahl, who was on leave from his wartime Washington posting, insisted on final approval of script and production.

The story concerns mischievous mythical creatures, the Gremlins of the title, often invoked by Royal Air Force pilots as an explanation of mechanical troubles and mishaps. In Dahl's book, the gremlins' motivation for sabotaging British aircraft is revenge of the destruction of their forest home, which was razed to make way for an aircraft factory. The principal character in the book, Gus, has his Hawker Hurricane fighter destroyed over the English Channel by a gremlin, but is able to convince the gremlins as they parachute into the water that they should join forces against a common enemy, Hitler and the Nazis, rather than fight each other.

Eventually, the gremlins are re-trained by the Royal Air Force to repair rather than sabotage aircraft, and restore Gus to active flight status after a particularly severe crash. The book also contains picturesque details about the ordinary lives of gremlins: baby gremlins, for instance, are known as widgets, and females as fifinellas, a name taken from the great "flying" filly racehorse Fifinella, that won both The Derby and Epsom Oaks in 1916, the year Dahl was born.

The publication of The Gremlins by Random House consisted of a 50,000 run for the U.S. market with Dahl ordering 50 copies for himself as promotional material, handing them out to everyone he knew, including the British Ambassador in Washington Lord Halifax, and the First Lady of the U.S. Eleanor Roosevelt, who loved to read it to her grandchildren. The book was considered an international success with 30,000 more sold in Australia but initial efforts to reprint the book were precluded by a wartime paper shortage. Reviewed in major publications, Dahl was considered a writer-of-note and his appearances in Hollywood to follow up with the film project were met with notices in Hedda Hopper's columns.

Facing copyright problems and realising that the Air Ministry's "Clause 12" in the original film contract would restrict the studio, Walt Disney, who had a personal interest in The Gremlins, reluctantly began to "wind down" the project. By August 1943, Disney had even reconsidered an animated "short" based on The Gremlins and indicated to Dahl by correspondence that further work would not continue. After a year of story conferences and related research, Dahl realised that his book would be the only tangible product emanating from the aborted film.

The story of gremlins appeared in Issues #33-#41 of Walt Disney's Comics and Stories published by Walt Disney Productions between June 1943 and February 1944; it contained a nine-episode series of short, silent stories featuring a Gremlin Gus as their star. The first was drawn by Vivie Risto and the rest of them by Walt Kelly. This served as their introduction to the comic book audience. These comics were subsequently reprinted in 1987 by Gladstone Publishing Ltd.

A special edition of the book was produced to commemorate the 60th Anniversary of the United States Air Force and was distributed exclusively through the Army and Air Force Exchange Service. The USAF special edition featured a unique dust jacket that bore the commemorative seal of the 60th USAF Anniversary. The inside flap of the dust jacket featured a brief history of the book's role in improving morale for airmen and their families. The initial distribution of the USAF 60th Anniversary commemorative edition sold out at all participating AAFES locations on the first day of sale.

Used copies of the first edition book are highly prized and sought after by collectors of both Roald Dahl's works and Disney's; these copies may be valued anywhere between US$100 and US$10,000.

"Nightmare at 20,000 Feet", a 1963 Twilight Zone episode, starring William Shatner, is a homage to the legend of gremlins, one being seen dismantling an airliner during flight. The role was played by John Lithgow in the 1983 movie.

In the book "Myth Conceptions," from the MythAdventures series, Robert Asprin describes a gremlin as a small, blue-skinned creature that has a tendency to vanish when the viewer's attention is distracted.

The 1984 film Gremlins, produced by Steven Spielberg and directed by Joe Dante, is loosely inspired by Dahl's characters, featuring evil and destructive monsters which mutate from small furry creatures.

In September 2006, Dark Horse Comics published The Gremlins: The Lost Walt Disney Production, a faithfully restored and updated version of The Gremlins including an introduction by acclaimed film historian Leonard Maltin as well as creating a series of Gremlin-inspired toys and figurines, that were patterned after the original Dahl-inspired characters as well as Return of the Gremlins, a comic sequel mini-series in which the grandson of pilot Gus meets the Gremlins when inheriting his grandfather's house in England.

The Gremlins appear in the Epic Mickey franchise as tiny helpers of Mickey Mouse. Their leader Gus (voiced by Bob Joles in the first game and Cary Elwes in the second) serves as a conscience figure to Mickey (as Jiminy Cricket is to Pinocchio). Unlike in the book, the Gremlins can teleport.

All content from Kiddle encyclopedia articles (including the article images and facts) can be freely used under Attribution-ShareAlike license, unless stated otherwise. Cite this article:
The Gremlins Facts for Kids. Kiddle Encyclopedia.