On the stage, he has appeared in Broadway productions including the musical adaptations of Sweet Smell of Success and Dirty Rotten Scoundrels. In 2007, he made his Royal Shakespeare Company debut as Malvolio in Neil Bartlett's production of Twelfth Night. He has also recorded music, such as the 1999 children's music album Singin' in the Bathtub, and has written poetry and short stories for children, such as Marsupial Sue. His work in children's entertainment has earned him Grammy Award nominations and two Parents' Choice Silver Honor Awards.

Lithgow was born in Rochester, New York. His mother, Sarah Jane (née Price), was a retired actress. His father, Arthur Washington Lithgow III, was a theatrical producer and director who ran the McCarter Theatre in Princeton, New Jersey. 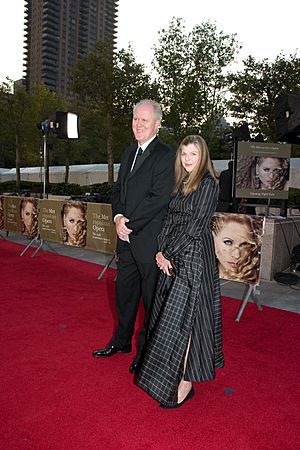 In 1973, Lithgow debuted on Broadway in David Storey's The Changing Room, for which he received both the Tony and Drama Desk Award as Best Featured Actor in a Play. The following year he starred opposite Lynn Redgrave in My Fat Friend, and in 1976 he starred opposite Meryl Streep in Arthur Miller's A Memory of Two Mondays. He was nominated for the Best Actor Tony Awards for Requiem for a Heavyweight (1985) and M. Butterfly (directed by John Dexter, 1988).

He appears in a solo play John Lithgow: Stories by Heart, which opened on Broadway on January 11, 2018 at the American Airlines Theatre, written by Lithgow. Lithgow has performed this play around the US, starting at the Lincoln Center Theater in 2008, with a return performance at Lincoln Center in April to May 2019.

He has has been on stage and played many parts in his long talented career. 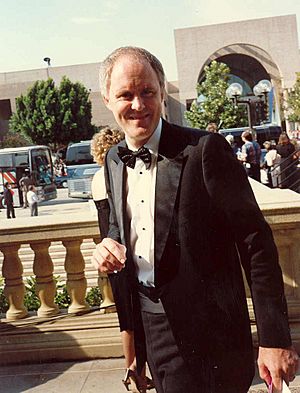 John Lithgow on the red carpet at the 40th Annual Primetime Emmy Awards on August 28, 1988

In 1979, Lithgow portrayed Lucas Sergeant in Bob Fosse's semi-autobiographical movie All That Jazz. The character was loosely based on the real-life director/choreographer Michael Bennett, best known for his work on Dreamgirls and A Chorus Line.

In 1983 and 1984, Lithgow was nominated for the Academy Award for Best Supporting Actor for his performances as Roberta Muldoon in The World According to Garp and as Sam Burns in Terms of Endearment. Both films were screen adaptations of popular novels. Lithgow originated the character of Dr. Emilio Lizardo/Lord John Whorfin, an Italian physicist inhabited by an evil alien, which he played in the 1984 cult film The Adventures of Buckaroo Banzai Across the 8th Dimension. In 1984, Lithgow also played a pastor who condemns dancing in Footloose. In 1985 he played the evil toy manufacturer in Santa Claus: The Movie.

In 1983, Lithgow appeared in a remake of the classic Twilight Zone episode "Nightmare at 20,000 Feet" in Twilight Zone: The Movie as the paranoid passenger made famous on the television show by William Shatner. In an interview with Bill Moyers, Lithgow reveals this role as his favorite of his film career.

In 1986, Lithgow starred in the science fiction film The Manhattan Project. As lead scientist in charge of nuclear research involving plutonium, he learns a lesson from the teenage son of his new girlfriend about the moral danger of doing pure research that will certainly lead to death and destruction.

As a voice actor, Lithgow voiced the evil Lord Farquaad in the Shrek movie franchise who also appears in Shrek, Shrek in the Swamp Karaoke Dance Party, Shrek 4-D which was originally Shrek 3-D and used as an amusement park attraction and Shrek the Third.

In television, Lithgow is probably most widely known for his starring role as Dick Solomon in the 1996–2001 NBC sitcom 3rd Rock from the Sun. He was nominated for a Primetime Emmy Award in the category Outstanding Lead Actor in a Comedy Series in each of the program's six seasons and won three times, in 1996, 1997, and 1999. His son Ian regularly appeared alongside him as Leon, one of his physics students.

In 1986, Lithgow received a Primetime Emmy Award in the category Outstanding Guest Performer in a Drama Series for his appearance in the episode The Doll of the Amazing Stories anthology series.

Additionally, Lithgow has been nominated for an Emmy Award for Outstanding Supporting Actor in a Limited Series or a Special for The Day After (1983), and two Emmy Awards for Outstanding Lead Actor in a Miniseries or a Special for Resting Place (1986) and My Brother's Keeper (1995). Lithgow was approached about playing Dr. Frasier Crane on Cheers, but turned it down. Lithgow starred with Jeffrey Tambor in the NBC sitcom Twenty Good Years.

Since 2006 he has starred in Campbell Soup Company's commercials advertising their Campbell's Select premium soup brand.

On March 5, 2009, Lithgow made a cameo on NBC's 30 Rock, in the episode "Goodbye, My Friend," with several references to his role in Harry and the Hendersons.

In September 2009, Lithgow joined the cast of Dexter as Arthur Mitchell and Dexter Morgan's nemesis. He won a Golden Globe Award for this role, and won an Emmy for Outstanding Guest Actor In A Drama Series.

He guest starred on How I Met Your Mother in the role of Barney Stinson's father, Jerry. John voiced The White Rabbit in the ABC mini-series, Once Upon a Time in Wonderland.

Lithgow portrays Winston Churchill in the 2016 Netflix drama series The Crown for which he won a Screen Actors Guild Award and an Emmy. He also starred as a professor of poetry in the first season (spring 2017) of the NBC mockumentary series Trial & Error. 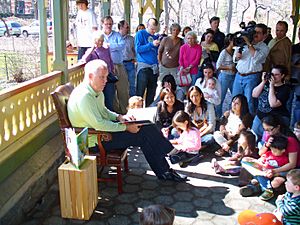 Lithgow reading a book to children in 2007

Lithgow has done extensive work for children, including several books and albums. Some of his book titles are Marsupial Sue, Marsupial Sue Presents "The Runaway Pancake," Lithgow Party Paloozas!: 52 Unexpected Ways to Make a Birthday, Holiday, or Any Day a Celebration for Kids, Carnival of the Animals, A Lithgow Palooza: 101 Ways to Entertain and Inspire Your Kids, I'm a Manatee, Micawber, The Remarkable Farkle McBride, Mahalia Mouse Goes to College and I Got Two Dogs. He also appeared as a guest on the Canadian children's program, Ants in Your Pants.

Lithgow launched into a career as a recording artist with the 1999 album of children's music, Singin' in the Bathtub. In June 2002, Lithgow released his second children's album Farkle and Friends. It was the musical companion to his book The Remarkable Farkle McBride, which tells the story of a young musical genius. Farkle and Friends features the vocal talents of Lithgow and Bebe Neuwirth backed by the Bill Elliott Swing Orchestra.

In August 2006, Lithgow released The Sunny Side of the Street, his third children's album and first with Razor & Tie. This album features versions of classic songs from The Great American Songbook including “Getting to Know You” and “Ya Gotta Have Pep”. Produced by JC Hopkins. Lithgow also makes occasional appearances on stage and television singing children's songs and accompanying himself on guitar.

All content from Kiddle encyclopedia articles (including the article images and facts) can be freely used under Attribution-ShareAlike license, unless stated otherwise. Cite this article:
John Lithgow Facts for Kids. Kiddle Encyclopedia.